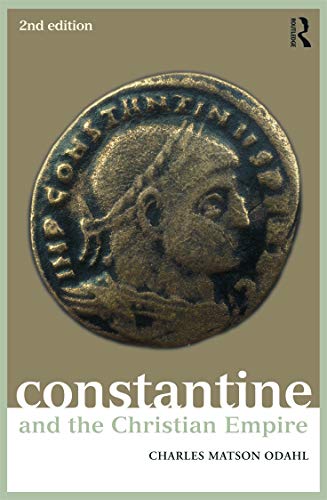 For thirty years Charles Matson Odahl has traced Constantine's footsteps around Britain, continental Europe and the Middle East, in a quest to understand this most astute of emperors as well as his role in solving the troubles of the 3rd century.

This biographical narrative is a detailed portrayal of the life and career of the first Christian emperor Constantine the Great (273 - 337). Combining vivid narrative and historical analysis, Charles Odahl relates the rise of Constantine amid the crises of the late Roman world, his dramatic conversion to and public patronage of Christianity, and his church building programs in Rome, Jerusalem and Constantinople which transformed the pagan state of Roman antiquity into the Christian empire medieval Byzantium.

The author's comprehensive knowledge of the literary sources and his extensive research into the material remains of the period mean that this volume provides a more rounded and accurate portrait of Constantine than previously available.

A landmark publication in Roman Imperial, early Christian, and Byzantine history, Constantine and the Christian Empire will remain the standard account of the subject for years to come.

'Altogether this is a very good account of one of the greatest of the Roman Emperors.' - The NYMAS Review
Charles Matson Odahl long served as the Professor of Ancient and Medieval History and Latin Literature at Boise State University in Boise, Idaho (1975-2011) and now serves as Visiting Professor for Roman and Byzantine History at Oregon State University in Corvallis, Oregon. His main research interests are Cicero and the late Roman Republic, early Christianity, and Constantine and the early Byzantine Empire. He has travelled, lived, studied and taught throughout Europe and around the Mediterranean Basin, and examined all of the historical sites and monuments of the Ciceronian and Constantinian Eras. Previous publications include Early Christian Latin Literature (1993), Cicero and the Catilinarian Conspiracy (Routledge, 2010), and first and second editions of Constantine and the Christian Empire (Routledge, 2004 and 2010).

1. The Subject and Ancient Sources 2. The Imperial Crisis and Illyrian Emperors 3. The First Tetrarchy and the Caesar's Son 4. The Gallic Emperor and the Dying Persecutors 5. The Italian Campaign and Constantine's Conversion 6. Religious Concerns and Apostolic Rome 7. The Eastern Crusade and the Nicene Council 8. The Dynastic Tragedy and Helena's Pilgrimage 9. Imperial Concerns and Christian Constantinople 10. The Final Campaigns and the Emperor's Heirs 11. The Thirteenth Apostle and the Christian Empire 12. The Legacy and Modern Interpretations

GOR011542835
9780415645140
041564514X
Constantine and the Christian Empire by Charles Odahl (Oregon State University, USA)
Charles Odahl (Oregon State University, USA)
Roman Imperial Biographies
Used - Good
Paperback
Taylor & Francis Ltd
2012-09-05
440
N/A
Book picture is for illustrative purposes only, actual binding, cover or edition may vary.
This is a used book - there is no escaping the fact it has been read by someone else and it will show signs of wear and previous use. Overall we expect it to be in very good condition, but if you are not entirely satisfied please get in touch with us
Trustpilot