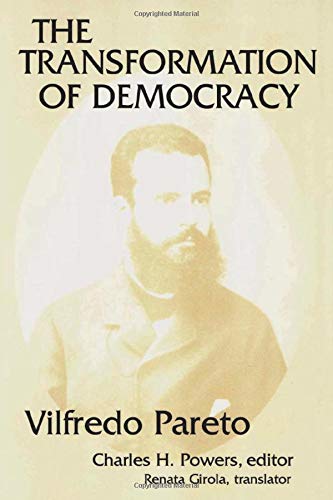 The Transformation of Democracy
by Charles Powers

The Transformation of Democracy Summary

The Transformation of Democracy by Charles Powers

Combining a thorough introduction to the work of nineteenth and early twentieth-century Italian social theo-rist Vilfredo Pareto with a highly read-able English translation of Pareto's last monograph, "Generalizations," origi-nally published in 1920, this work illus-trates precisely how and why demo-cratic forms of government undergo decay and are eventually re-invigo-rated. More than any other social scien-tist of his generation, Pareto offers a well-developed, articulate, and com-pelling theory of change based on a Newtonian vision of science and an en-gineering model of social equilibrium.

In his introduction, Powers focusses on Pareto's intellectual maturation and on his overall theory of society. Powers describes the various stages of Pareto's development as engineer, economist, political scientist, and finally as sociol-ogist. He explains how Pareto consid-ered himself the Einstein of social sci-ence and how he introduced the con-cept of relativity into the social sci-ences. Even if such self-claims were rarely widely shared, the sense of Pareto's originality is doubted by few, if any, contemporary scholars. This last, and in many ways most penetrat-ing, of Pareto's briefer works, warns of the dangers which can befall demo-cratic order. It is important because, as his final attempt to clarify his ideas, it places his earlier works in perspective. Pareto generates a comprehensive the-ory of complex social phenomena.

Charles Powers is assistant professor of sociology, Indiana University. He has published several articles on Pareto in Sociological Theory and Contemporary Sociology, among other journals.

GOR010753298
The Transformation of Democracy by Charles Powers
Charles Powers
Used - Very Good
Paperback
Taylor & Francis Inc
1984-01-30
104
0878559493
9780878559497
N/A
Book picture is for illustrative purposes only, actual binding, cover or edition may vary.
This is a used book - there is no escaping the fact it has been read by someone else and it will show signs of wear and previous use. Overall we expect it to be in very good condition, but if you are not entirely satisfied please get in touch with us.