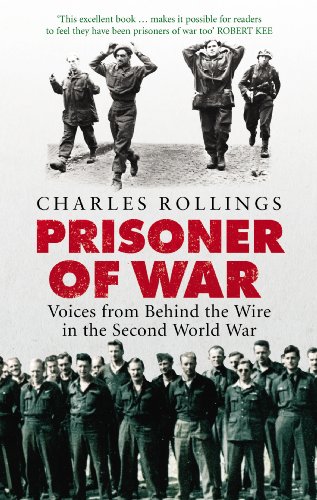 Prisoner Of War
by Charles Rollings

Out of Stock
$23.49
inc. GST
'For you, the war is over.' These famous words marked the end of the Second World War for nearly half a million allied servicemen, and the beginning of a very different battle in captivity.
Like New
Only 0 left

Prisoner Of War: Voices from Behind the Wire in the Second World War by Charles Rollings

'For you, the war is over.' These famous words marked the end of the Second World War for nearly half a million allied servicemen, and the beginning of a very different battle in captivity. Waged against boredom, brutality, disease, hunger and despair, it was a battle for survival, fought without the aid of weapons against fully armed enemy captors. Based on interviews and correspondence with ex-POWs and their relatives over the last 30 years, Prisoner of War is a major survey of allied POWs from all walks of life. Extraordinary stories of extremes: courage, hope and desperation are revealed in the words of those that were there. Arranged chronologically, the book follows those involved from capture, through interrogation, imprisonment, escape, to final liberation and homecoming. POWs and, in particular, those who broke free, have become a post-war cultural icon; a symbol of the will to survive against the odds. Rich with incident and emotion, Prisoner of War is a compelling look at the lives of extraordinary individuals trapped behind the wire.

"This excellent book ... makes it possible for readers to feel they have been prisoners of war too" -- Robert Kee
"Charles Rollings uses the Imperial War Museum's sound archive with consummate skill" * The Tablet *
"Sometimes grim, often moving and always fascinating ... These stories are close enough to touch" * Daily Sport *

Charles Rollings is the author of two books on Royal Air Force POWs in Germany during the Second World War: Wire and Walls (2003) and Wire and Worse (2004), and has been involved in the making of two documentaries, Going Underground: The Great Escape for the BBC, and Prisoner of War, now available on dvd. He has written articles for The Times, Daily Telegraph, Guardian and Independent, and regularly contributes to Book and Magazine Collector. He is married and lives in North London.

GOR010434219
Prisoner Of War: Voices from Behind the Wire in the Second World War by Charles Rollings
Charles Rollings
Used - Like New
Paperback
Ebury Publishing
2008-03-06
400
0091910080
9780091910082
N/A
Book picture is for illustrative purposes only, actual binding, cover or edition may vary.
The book has been read, but looks new. The book cover has no visible wear, and the dust jacket is included if applicable. No missing or damaged pages, no tears, possible very minimal creasing, no underlining or highlighting of text, and no writing in the margins.