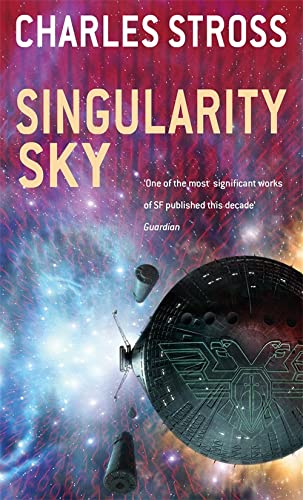 A major SF debut from a British writer who will stand alongside Banks, Hamilton and Reynolds.

In the twenty-first century man created the Eschaton, a sentient artificial intelligence. It pushed Earth through the greatest technological evolution ever known, while warning that time travel is forbidden, and transgressors will be eliminated.

Distant descendants of this ultra high-tech Earth live in parochial simplicity on the far-flung worlds of the New Republic. Their way of life is threatened by the arrival of an alien information plague known as the Festival. As forbidden technologies are literally dropped from the sky, suppressed political factions descend into revolutionary turmoil.

A battle fleet is sent from Earth to destroy the Festival, but Spaceship engineer Martin Springfield and U.N. diplomat Rachel Mansour have been assigned rather different tasks. Their orders are to diffuse the crisis or to sabotage the New Republic's war-fleet, whatever the cost, before the Eschaton takes hostile action on a galactic scale.

Breathtaking ... a real contender for "space opera of the year" * LOCUS *
Stross is an author who anyone interested in SF should read and relish * SFX *
Darkly funny and crackling with high-bandwidth ideas * PAUL McAULEY *
Where Charles Stross goes today, the rest of science fiction will follow tomorrow * Gardner Dozois *
Charles Stross is a full-time science fiction writer and resident of Edinburgh, Scotland. The author of seven Hugo-nominated novels and winner of three Hugo awards for best novella, two of which are part of the Laundry Files series, Stross's works have been translated into over twelve languages. As the owner of degrees in pharmacy and computer science, he graduated as the world's only academically qualified cyberpunk writer just as cyberpunk died. Today he describes his job as telling lies for money and tormenting his imaginary friends. Follow his blog at http://www.accelerando.org/ and his Twitter feed at @cstross.
GOR001256355
9781841493343
1841493341
Singularity Sky by Charles Stross
Charles Stross
Singularity Sky
Used - Very Good
Paperback
Little, Brown Book Group
2005-02-03
400
N/A
Book picture is for illustrative purposes only, actual binding, cover or edition may vary.
This is a used book - there is no escaping the fact it has been read by someone else and it will show signs of wear and previous use. Overall we expect it to be in very good condition, but if you are not entirely satisfied please get in touch with us
Trustpilot