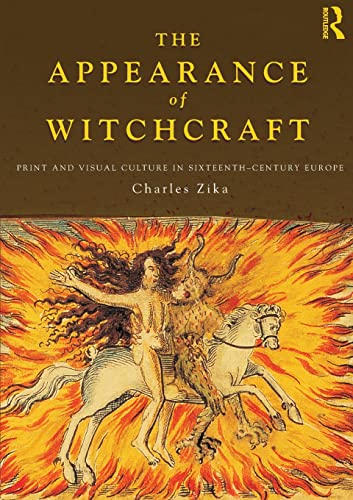 The Appearance of Witchcraft
by Charles Zika (University of Melbourne, Australia)

Used Price
$63.99
inc. GST
Free Shipping in Australia
Explores how visual representations of witchcraft contributed to the widespread acceptance of beliefs in sixteenth-century Europe and helped establish the conditions for the widespread persecution of witches.
Reviews:
Trustpilot
Like New

The Appearance of Witchcraft Summary

The Appearance of Witchcraft: Print and Visual Culture in Sixteenth-Century Europe by Charles Zika (University of Melbourne, Australia)

Shortlisted for the 2008 Katharine Briggs Award.

For centuries the witch has been a powerful figure in the European imagination; but the creation of this figure has been hidden from our view. Charles Zika's groundbreaking study investigates how the visual image of the witch was created in late fifteenth- and sixteenth-century Europe. He charts the development of the witch as a new visual subject, showing how the traditional imagery of magic and sorcery of medieval Europe was transformed into the sensationalist depictions of witches in the pamphlets and prints of the sixteenth century.

This book shows how artists and printers across the period developed key visual codes for witchcraft, such as the cauldron and the riding of animals. It demonstrates how influential these were in creating a new iconography for representing witchcraft, incorporating themes such as the power of female sexuality, male fantasy, moral reform, divine providence and punishment, the superstitions of non-Christian peoples and the cannibalism of the New World.

Lavishly illustrated and encompassing in its approach, The Appearance of Witchcraft is the first systematic study of the visual representation of witchcraft in the later fifteenth and sixteenth centuries. It will give the reader a unique insight into how the image of the witch evolved in the early modern world.

Customer Reviews - The Appearance of Witchcraft

The Appearance of Witchcraft Reviews

'This long awaited book is the definitive history of the image of the witch in fifteenth and sixteenth century Europe. Zika's scholarship is extraordinary - he takes us through popular perceptions, iconography and intellectual history as he unravels the meanings of these compelling images. A masterly study, it will interest all historians of sexuality, art, and culture.' - Lyndal Roper, The University of Oxford

'This is a major reworking of the visual history of witchcraft and more comprehensive than anything that has gone before. The scholarship is exhaustive and impeccable throughout... It will be the standard work on the subject for many years.' - Stuart Clark, University of Swansea

'The imagery of early modern witchcraft has not had such a detailed study before, and thus Zika's study is very welcome. His attention to both elite and popular versions of illustrations, and to the folklore of the period, make this an informative book on the folk beliefs of the time as well. The Appearance of Witchcraft is a book that anyone with an interest in witchcraft and supernatural belief in Europe or America should know.' - David Elton Gay, Indiana University

Charles Zika is Professor of History at the University of Melbourne. He researches the cultural and religious history of late medieval and early modern Europe. Among his publications are Exorcising our Demons: magic, witchcraft and visual culture in early modern Europe (2003).

Introduction Chapter 1. Fashioning a New Visual Language for Witchcraft Chapter 2. The Transformation of Sorcery and Magic in the Fifteenth Century Chapter 3. Witches' Cauldrons and Women's Bodies Chapter 4. Wild Riders, Popular Folklore and Moral Disorder Chapter 5. Transformation, Death and Sexuality in the Classical World Chapter 6. A Biblical Necromancer and Two Christian Saints Chapter 7. Reporting the News and Reading the Signs Chapter 8. On the Margins of Christian Europe

GOR011104509
The Appearance of Witchcraft: Print and Visual Culture in Sixteenth-Century Europe by Charles Zika (University of Melbourne, Australia)
Charles Zika (University of Melbourne, Australia)
Used - Like New
Paperback
Taylor & Francis Ltd
2009-09-28
320
0415563550
9780415563550
N/A
Book picture is for illustrative purposes only, actual binding, cover or edition may vary.
The book has been read, but looks new. The book cover has no visible wear, and the dust jacket is included if applicable. No missing or damaged pages, no tears, possible very minimal creasing, no underlining or highlighting of text, and no writing in the margins.