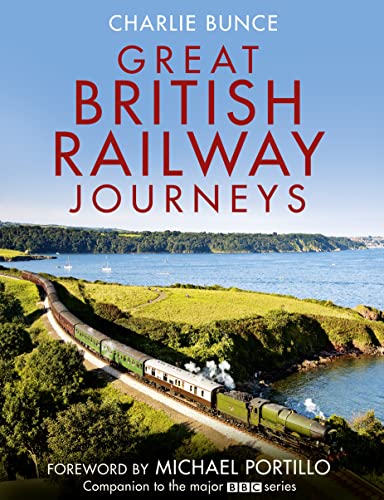 A glorious insight into Britain over the last 150 years - its history, landscape and people - from the window of Britain's many and magnificent railway journeys.

A glorious insight into Britain over the last 150 years - its history, landscape and people - from the window of Britain's many and magnificent railway journeys.

Inspired by George Bradshaw, a 19th-century cartographer who mapped Britain's railways as they sprung up around him, Charlie Bunce and Michael Portillo take a journey along nine classic British railway routes and surround themselves with the history, the charm and the people at the heart of the railways.

More than just a practical mode of transport, Britain's railways are richly representative and evocative of British society and how it has developed over the last 150 years. Symbols of progress and change, they tell of remarkable breakthroughs in technology, industry and travel. Iconic in their design they have both made a distinctive impact on Britain's landscape and opened it up to millions of people who, through train journeys alone, became acquainted with wonderful new places and sights. And as fond staples of childhood experiences they evoke deep, memorable feelings of nostalgia, of holidays and home.

Great British Train Journeys is a passionate, charming and insightful look at Britain from a window seat: a compelling read for all who look forward to travelling by train.

* `A glorious insight into Britain over the last 150 years - its history, landscape and people - from the window of Britain's many and magnificent railway journeys [...] It fills in the gaps, gives you more insight, takes you further, as it were. Charlie Bunce's words are the perfect compliment to Portillo's commentaries, and the entire book is a delight to read. The original photography is stunning, while the historical photographs are simply fascinating. All in all, this is a book no serious history student of this period can afford to be without. It's for armchair travellers, yes indeed, but it's much more valuable than that.' - Books Monthly's Nonfiction Choice for February

Charlie Bunce has spent his working life in broadcasting producing many award-winning programmes. He is now Editor of Factual Programmes at talkbackTHAMES, where he produced Grand Designs and Great British Railway Journeys.

Michael Portillo was an MP for nearly 20 years and held three ministerial positions in the cabinet. He now has a regular weekly television show about politics, and has made documentaries on a range of subjects, including Great British Railway Journeys.

GOR008007752
Great British Railway Journeys by Charlie Bunce
Charlie Bunce
Used - Like New
Hardback
HarperCollins Publishers
2011-01-01
256
0007394764
9780007394760
N/A
Book picture is for illustrative purposes only, actual binding, cover or edition may vary.
This is a used book - there is no escaping the fact it has been read by someone else and it will show signs of wear and previous use. Overall we expect it to be in very good condition, but if you are not entirely satisfied please get in touch with us.