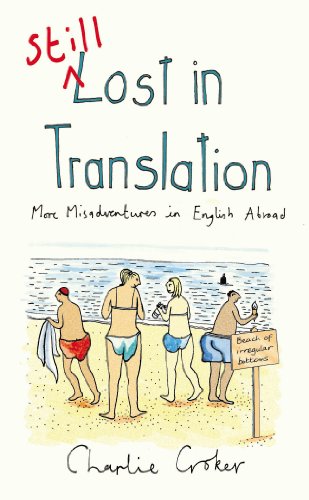 In Stock
$10.49
+10% GST
With such a wealth of material, a sequel wasn't just a necessity, it was a public service, and Still Lost in Translation is even more addictive, whimsical and side-splittingly hilarious than the first book.
Very Good
5 in stock

Have you ever arrived in a hotel room and been baffled by the information provided? Beware of your luggage. In your room you will find a minibar which is filled with alcoholics. Do not throw urine around. Have you ever been to a restaurant and wondered what on earth to order? Bored Meat Stew Lorry Driver Soup Kiss Lorraine Have you ever arrived in an airport and found that the supposedly helpful signs just make you feel more lost? You are required to declare all sorts of private things. Departure. Bus stop. Car rectal. Please buy your ticket consciously. Charlie Croker has, and in 2006 he gathered together what he thought was the definitive collection of English language howlers for his bestselling book Lost in Translation. But he reckoned without the great British public. Not only was the book a smash hit, it also opened the floodgates to a deluge of emails and letters stuffed full of further mistranslations and mutilated phrases. From a leaflet from the Museum of Rasputin in Russia (which is apparently situated in a house that belonged a pilot fish Zubov) to a song title on a pirated Pink Floyd CD (Come Fartably Numb), the scrambled sentences just kept flooding in. At the same time Charlie has continued his travels and picked up gems of his own. With such a wealth of material, a sequel wasn't just a necessity, it was a public service, and Still Lost in Translation is even more addictive, whimsical and side-splittingly hilarious than the first book.

Charlie Croker is an author and journalist. His previous books include Lost in Translation, The Little Book of Beckham and A Game of Three Halves. He has also written for The Times, the Independent on Sunday and the Spectator, among others. His name is frequently misspelt as Charlie Crocker.

GOR001408765
Still Lost in Translation: More misadventures in English abroad by Charlie Croker
Charlie Croker
Used - Very Good
Paperback
Cornerstone
2008-07-03
176
0099517566
9780099517566
N/A
Book picture is for illustrative purposes only, actual binding, cover or edition may vary.
This is a used book - there is no escaping the fact it has been read by someone else and it will show signs of wear and previous use. Overall we expect it to be in very good condition, but if you are not entirely satisfied please get in touch with us.