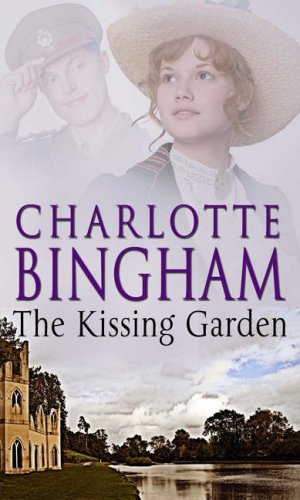 The Kissing Garden by Charlotte Bingham

As children, George Dashwood and Amelia Dennison loved to roam the Sussex Downs in company with their dogs, and just as their two very different families were friends, so too were they, until they are caught in a thunderstorm. She loves George but she cannot get George to love her.

The Kissing Garden by Charlotte Bingham

As children, George Dashwood and Amelia Dennison loved to roam the Sussex Downs in company with their dogs, and just as their two very different families were friends, so too were they, until they are caught in a thunderstorm. Sheltering from the elements, the now mature George realizes that what he feels for Amelia is more than friendship. But it is 1914 and the declaration of war cuts across any romantic plans that the two might have. George is away at the Front for four years, and when the miracle happens and he returns home safely, it seems to Amelia and to both of their families that all they have to do is to marry. But Amelia quickly realizes that the George she loved as a child has gone. Amelia knows nothing about marriage. She loves George but she cannot get George to love her. It isn't until they are touring the West Country and they come across an old ruined priory with a magical atmosphere which they decide to buy that their chance for happiness becomes a reality. It is here, finally, in a part of the grounds which comes to be known as the Kissing Garden, that they finally find love together.
"'Extremely popular...her books sell and sell.'" * Daily Mail *
"A perfect escapist cocktail for summertime romantics." -- MAIL ON SUNDAY
Charlotte Bingham comes from a literary family - her father sold a story to H. G. Wells when he was only seventeen - and Charlotte wrote her autobiography, CORONET AMONG THE WEEDS, at the age of nineteen. Since then, she has written comedy and drama series, films and plays for both England and America with her husband, the actor and playwright Terence Brady. Her published novels include the highly acclaimed bestsellers SUMMERTIME, THE SEASON, THE BLUE NOTE, THE LOVE KNOT, THE KISSING GARDEN, LOVE SONG, TO HEAR A NIGHTINGALE, THE BUSINESS, IN SUNSHINE OR IN SHADOW, STARDUST, NANNY, CHANGE OF HEART, DEBUTANTES, THE NIGHTINGALE SINGS, GRAND AFFAIR, THE CHESTNUT TREE, THE WIND OFF THE SEA, THE MOON AT MIDNIGHT, DAUGHTERS OF EDEN, THE HOUSE OF FLOWERS, THE MAGIC HOUR, FRIDAY'S GIRL, IN DISTANT FIELDS and THE WHITE MARRIAGE.
GOR003632398
The Kissing Garden by Charlotte Bingham
Charlotte Bingham
Used - Very Good
Paperback
Transworld Publishers Ltd
1999-08-05
624
0553507176
9780553507171
N/A
Book picture is for illustrative purposes only, actual binding, cover or edition may vary.
This is a used book - there is no escaping the fact it has been read by someone else and it will show signs of wear and previous use. Overall we expect it to be in very good condition, but if you are not entirely satisfied please get in touch with us.
Trustpilot