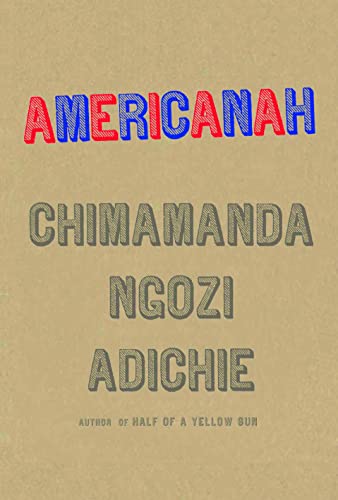 'A delicious, important novel' The Times

'Some novels tell a great story and others make you change the way you look at the world. Americanah does both.' Guardian

SHORTLISTED FOR THE BAILEY'S WOMEN'S PRIZE FOR FICTION

'A delicious, important novel' The Times

'Some novels tell a great story and others make you change the way you look at the world. Americanah does both.' Guardian

As teenagers in Lagos, Ifemelu and Obinze fall in love. Their Nigeria is under military dictatorship, and people are fleeing the country if they can. The self-assured Ifemelu departs for America. There she suffers defeats and triumphs, finds and loses relationships, all the while feeling the weight of something she never thought of back home: race. Obinze had hoped to join her, but post-9/11 America will not let him in, and he plunges into a dangerous, undocumented life in London.

Thirteen years later, Obinze is a wealthy man in a newly democratic Nigeria, while Ifemelu has achieved success as a blogger. But after so long apart and so many changes, will they find the courage to meet again, face to face?

'A brilliant novel: epic in scope, personal in resonance and with lots to say' Elizabeth Day, Observer

'A delicious, important novel from a writer with a great deal to say' The Times

'A brilliant exploration of being African in America ... an urgent and important book, further evidence that its author is a real talent' Sunday Telegraph

'An extremely thoughtful, subtly provocative exploration of structural inequality, of different kinds of oppression, of gender roles, of the idea of home. Subtle, but not afraid to pull its punches' Alex Clark, Guardian

'A tour de force ... The artistry with which Adichie keeps her story moving, while animating the complex anxieties in which the characters live and work, is hugely impressive' Mail on Sunday

'Adichie is terrific on human interactions ... Adichie's writing always has an elegant shimmer to it ... Wise, entertaining and unendingly perceptive' Independent on Sunday

'"An honest novel about race" ... with guts and lustre ... within the context of a well-crafted, compassionate, visceral and delicately funny tale of lasting high-school love and the sorrows and adventures of immigration' Diana Evans, The Times

'[A] long, satisfying novel of cross-continental relationships, exile and the pull of home ... Adichie's first novel for seven years and well worth the wait' FT

GOR008193678
Americanah by Chimamanda Ngozi Adichie
Chimamanda Ngozi Adichie
Used - Like New
Paperback
HarperCollins Publishers
2013-04-01
400
0007306229
9780007306220
N/A
Book picture is for illustrative purposes only, actual binding, cover or edition may vary.
The book has been read, but looks new. The book cover has no visible wear, and the dust jacket is included if applicable. No missing or damaged pages, no tears, possible very minimal creasing, no underlining or highlighting of text, and no writing in the margins.