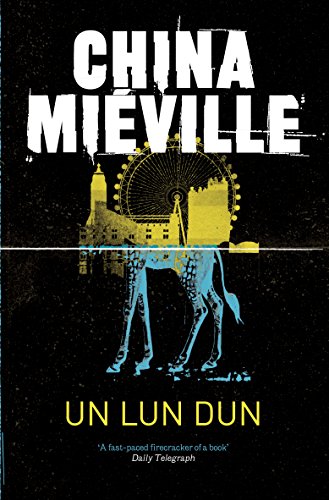 The iron wheel began to spin, slowly at first, then faster and faster. The room grew darker. As the light lessened, so did the sound. Deeba and Zanna stared at each other in wonder. The noise of the cars and vans and motorbikes outside grew tinny . . . The wheel turned off all the cars and turned off all the lamps. It was turning off London.

Zanna and Deeba are two girls leading ordinary lives, until they stumble into the world of UnLondon, an urban Wonderland where all the lost and broken things of London end up . . . and some of its lost and broken people too. Here discarded umbrellas stalk with spidery menace, carnivorous giraffes roam the streets, and a jungle sprawls beyond the door of an ordinary house.

UnLondon is under siege by the sinister Smog and its stink-junkie slaves; it is a city awaiting its hero. Guided by a magic book that can't quite get its facts straight, and pursued by Hemi the half-ghost boy, the girls set out to stop the poisonous cloud before it burns everything in its path. They are joined in their quest by a motley band of UnLondon locals, including Brokkenbroll, boss of the broken umbrellas, Obaday Fing, a couturier whose head is an enormous pincushion, and an empty milk carton called Curdle.

Winner of the Locus Award for Best Young Adult Book, China Mieville's Un Lun Dun is an extraordinary vivid creation;is populated by astonishing frights and delights that will thrill the imagination.

China Mieville lives and works in London. He is three-time winner of the prestigious Arthur C. Clarke Award (Perdido Street Station, Iron Council and The City & The City) and has also won the British Fantasy Award twice (Perdido Street Station and The Scar). The City & The City, an existential thriller, was published in 2009 to dazzling critical acclaim and drew comparison with the works of Kafka and Orwell (The Times) and Philip K. Dick (Guardian). The richly imagined Bas-Lag world is the setting for the novels Perdido Street Station, The Scar and Iron Council. He is also the author of the YA novel, Railsea. He lives and works in London.
GOR003810677
9780330536684
0330536680
Un Lun Dun by China Mieville
China Mieville
Used - Very Good
Paperback
Pan Macmillan
2011-05-06
528
Winner of Locus Award Best Young Adult Book 2008 (UK)
Book picture is for illustrative purposes only, actual binding, cover or edition may vary.
This is a used book - there is no escaping the fact it has been read by someone else and it will show signs of wear and previous use. Overall we expect it to be in very good condition, but if you are not entirely satisfied please get in touch with us
Trustpilot