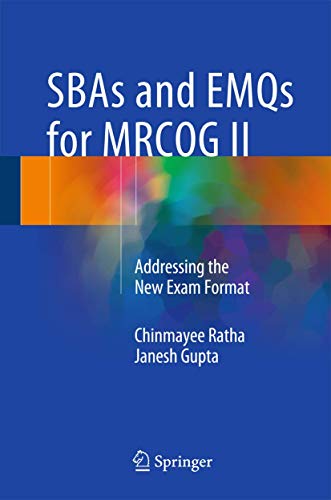 SBAs and EMQs for MRCOG II by Chinmayee Ratha

This book is a comprehensive collection of questions in the "single best answer (SBA)" format for the MRCOG2 theory exam.

This book is a comprehensive collection of questions in the "single best answer (SBA)" format for the MRCOG2 theory exam. This new format has been introduced in the exam paper from March 2015 and most candidates are still getting used to the change. This book will provide them ample opportunity to familiarize themselves with the concept and then practice answering the questions based on almost all subjects included in the MRCOG 2 theory syllabus.

Preparing for the MRCOG2 exam is a daunting task for all Obstetrics and Gynecology doctors. The college constantly reforms the exam structure in an effort to optimize the evaluation process. The endeavor of the authors is to equip the candidates with a vision of the holistic nature of the exam so that they master the art of answering SBA questions.

Dr Chinmayee Ratha is the Lead Consultant - Fetal Medicine at Rainbow Hospitals, Hyderabad, India. She is the academic co-ordinator of the department of Obstetrics and Gynecology in Rainbow hospitals. She is an FMF (UK) approved trainer for Fetal Medicine and runs a clinical fellowship programme for sub specialty trainees in India. She has published papers in peer reviewed, indexed journals and has received the FOGSI young author award in 2008 for the best publication in the Journal of Obstetrics and Gynecology of India. Her thesis paper on pre eclampsia was awarded the CS Dawn Gold medal in 2003.She has received several prizes for presentations of research projects and audits at various state, national and international seminars.

Dr Janesh Gupta is a Professor of Obstetrics and Gynaecology in the Institute of Metabolism and Systems Research, University of Birmingham Medical School and a Honorary Clinical Consultant at Birmingham Women's Hospital. He is a Consultant Obstetrician and Gynaecologist since 1995, at 31 years of age. Prior to this he was a Consultant Obstetrician & Gynaecologist post in the Department of Obstetrics & Gynaecology, Ninewells Hospital & Medical School, Dundee, Scotland for 3 years (from 1995-1998). He has published over 150 research papers in scientific journals as well as reviews and book chapters in the fields of fetal medicine, benign gynaecology (including abnormal uterine bleeding, fibroids, endometriosis, endometrial hyperplasia), and minimal access surgery. He is an Editor-in-Chief for the European Journal of Obstetrics and Gynecology and Reproductive Biology (EJOG).

NGR9788132226871
9788132226871
8132226879
SBAs and EMQs for MRCOG II: Addressing the New Exam Format by Chinmayee Ratha
Chinmayee Ratha
New
Hardback
Springer, India, Private Ltd
2016-02-16
461
N/A
Book picture is for illustrative purposes only, actual binding, cover or edition may vary.
This is a new book - be the first to read this copy. With untouched pages and a perfect binding, your brand new copy is ready to be opened for the first time
Trustpilot