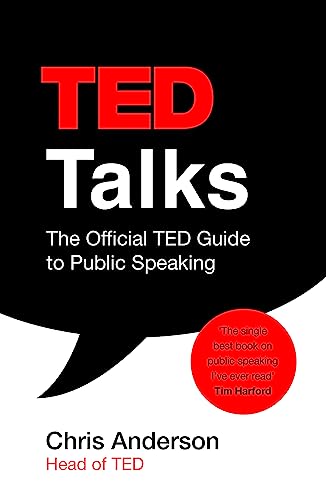 'This is not just the most insightful book ever written on public speaking-it's also a brilliant, profound look at how to communicate' - Adam Grant, author of ORIGINALS

In Ted Talks Chris Anderson, Head of TED, reveals the inside secrets of how to give a first-class presentation. Where books like Talk Like TED and TED Talks Storytelling whetted the appetite, here is the official TED guide to public speaking from the man who put TED talks on the world's stage. 'Nobody in the world better understands the art and science of public speaking than Chris Anderson. He is absolutely the best person to have written this book' Elizabeth Gilbert.

Anderson shares his five key techniques to presentation success: Connection, Narration, Explanation, Persuasion and Revelation (plus the three to avoid). He also answers the most frequently asked questions about giving a talk, from 'What should I wear?' to 'How do I handle my nerves?'.

Ted Talks is also full of presentation tips from such TED notable speakers as Sir Ken Robinson, Bill Gates, Mary Roach, Amy Cuddy, Elizabeth Gilbert, Dan Gilbert, Amanda Palmer, Matt Ridley and many more. This is a lively, fun read with great practical application from the man who knows what goes into a truly memorable speech. In Ted Talks Anderson pulls back the TED curtain for anyone who wants to learn how to prepare an exceptional presentation.

Is there a single recipe for a great speech? Of course not. But there are some essential ingredients, which the TED team sets out here with concision, verve and wit (which are also some of the ingredients). An inspiring, contemporary guide to the venerable arts of oratory. * Sir Ken Robinson *
Excellent; easily the best public speaking guide I have read. -- Tim Harford * Financial Times *
Nobody in the world better understands the art and science of public speaking than Chris Anderson. He is the absolutely perfect person to have written this book, and it will be a gift to many. -- Elizabeth Gilbert
This is not just the most insightful book ever written on public speaking-it's also a brilliant, profound look at how to communicate. If you ever plan to utter a sound, this is a must-read. It gives me hope that words can actually change the world. -- Adam Grant, Wharton professor and author of ORIGINALS
The TED Talk has reinvented the art of rhetoric for the 21st century - we now know that "ideas worth spreading" can indeed be spread far and wide, and with clarity and panache. Behind this revolution lies Chris Anderson, who had a vision that powerful ideas can improve the world and has developed a coherent philosophy and a set of guidelines for compelling communication. -- Steven Pinker
The TED Talk may well be the defining essay genre of our time: what the pamphlet was to the 18th-century, and the newspaper op-ed was to the twentieth. TED TALKS is a guidebook to this new language, written by the man who has made it a global force. -- Steven Johnson, bestselling author of HOW WE GOT TO NOW
For anyone who's got a story to tell, or an audience they want to engage - this book is a must-read * Forbes *

CHRIS ANDERSON is TED's president and head curator. Trained as a journalist after graduating from Oxford University, Anderson launched more than 100 successful magazines and websites before turning his attention to TED, which he and his non-profit organization acquired in 2001. His TED mantra - 'ideas worth spreading' - continues to blossom on an international scale. He lives in New York City.

GOR009051526
TED Talks: The official TED guide to public speaking: Tips and tricks for giving unforgettable speeches and presentations by Chris Anderson
Chris Anderson
Used - Very Good
Paperback
John Murray Press
2018-01-04
288
1472228065
9781472228062
N/A
Book picture is for illustrative purposes only, actual binding, cover or edition may vary.
This is a used book - there is no escaping the fact it has been read by someone else and it will show signs of wear and previous use. Overall we expect it to be in very good condition, but if you are not entirely satisfied please get in touch with us.