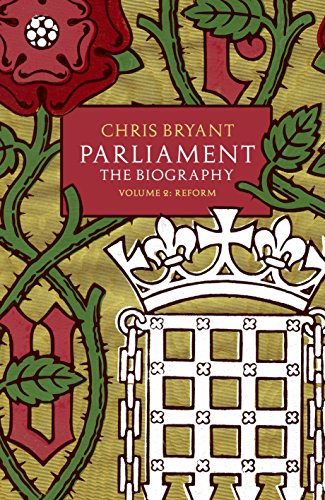 Over the last two hundred years Parliament has witnessed and effected dramatic and often turbulent change. Political parties rose - and fell. The old aristocratic order passed away. The vote was won for the working classes and, eventually, for women. The world was torn apart by two extraordinarily bloody wars. And individual politicians were cheered for their altruism or their bravery and jeered for their sexual or financial misdemeanours. This second volume of Chris Bryant's majestic Parliament: The Biography has a cast of characters that includes some of British history's most famous names: the Duke of Wellington, Sir Robert Peel, Gladstone, Disraeli, Lloyd George, Churchill and Thatcher. Its recurring theme is reform and innovation, but it also lays bare obsessive respect for the past and a dedication to evolution rather than revolution, which has left us with a fudged constitution still perilously dependent on custom, convention and gentlemen's agreements. This is riveting, flawlessly researched and accessible popular history for anyone with an interest in why modern Britain is the nation it is today.

"Impressive" * Independent *
"A sweeping history of Britain's political system... One of the most thoughtful accounts I have read" -- Francis Beckett * BBC History *
"Parliament is a very good read, with interesting anecdotes and observations enriched by the fact the author is an MP" * Total Politics *
"An entertaining read" * The Mail on Sunday *

CHRIS BRYANT is a British Labour Party Politician who has been Member of Parliament since 2001. He was Minister for Europe in the last Labour Government and Shadow Secretary of State for Culture, Media and Sport and Shadow Leader of the House of Commons in the Shadow Cabinet. Before entering parliament Chris was a priest in the Church of England. His previous books include biographies of Sir Stafford Cripps and Glenda Jackson as well as, most recently, his two-volume Parliament: a Biography.

GOR006013517
Parliament: The Biography (Volume II - Reform) by Chris Bryant
Chris Bryant
Used - Very Good
Hardback
Transworld Publishers Ltd
2014-08-14
480
0857522248
9780857522245
N/A
Book picture is for illustrative purposes only, actual binding, cover or edition may vary.
This is a used book - there is no escaping the fact it has been read by someone else and it will show signs of wear and previous use. Overall we expect it to be in very good condition, but if you are not entirely satisfied please get in touch with us.