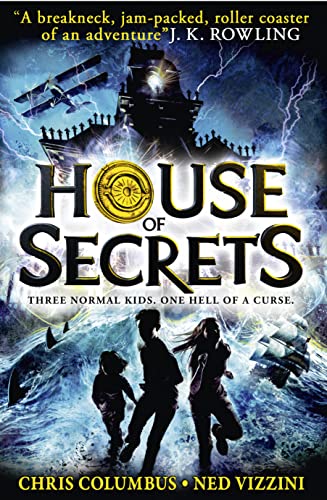 House of Secrets
by Chris Columbus

HOUSE OF SECRETS follows three siblings and their family as they are forced to move to a mysterious new house in San Francisco and end up embarking on a journey to retrieve a dark book of untold power. The first story in an epic fantasy adventure trilogy!

HOUSE OF SECRETS follows three siblings and their family as they are forced to move to a mysterious new house in San Francisco and end up embarking on a journey to retrieve a dark book of untold power. The first story in an epic fantasy adventure trilogy!

When Brendan, Cordelia and Nell move to Kristoff House they have no idea that they are about to unleash the dark magic locked within. For the house once belonged to a crazed writer, whose stories have come to life. Literally. Now the Walker kids must battle against deadly pirates, bloodthirsty warriors and a bone-crunching giant. If they fail they will never see their parents again and a power-mad Witch will take over the world. No pressure then . . .

House of Secrets is the first book in a major new series. IT'S GOING TO BE EPIC!

"an engrossing page-turner." - The Guardian

"House of Secrets...serves up everything an eight to twelve year old reader could possibly want from an adventure." - Love Reading 4 Kids

For over twenty-five years, Chris Columbus has written, directed and produced some of the most successful box-office hits, which have established him as a major force in contemporary Hollywood film-making. As a writer, he launched his career with the legendary films Gremlins and The Goonies. Columbus directed and produced the first two films in the blockbuster Harry Potter series and produced the third. More recently, Columbus has directed features such as the hit film Percy Jackson & the Olympians: The Lightning Thief. As a
director, Columbus has been at the helm of such films as Home Alone and Mrs. Doubtfire.

Ned Vizzini (1981-2013) began writing for the New York Press at the age of fifteen. At seventeen, he was asked to write a piece for the New York Times Magazine, and at nineteen, he published Teen Angst? Naaah..., his autobiography of his years at Stuyvesant High School. His debut teen novel, Be More Chill, was selected for the Today Show Book Club by Judy Blume. It's Kind of a Funny Story, a cult classic, was adapted into a 2010 film starring Zach Galifianakis and named one of the 100 Best-Ever Teen Novels by National Public Radio. The Other Normals, his third novel, was a Junior Library Guild selection. He was the co-author, with Chris Columbus, of the New York Times bestselling fantasy-adventure series House of Secrets. He wrote for the New Yorker and Salon. He also wrote for television, including MTV's hit show Teen Wolf. His work has been translated into twenty-five languages

GOR005757052
House of Secrets (House of Secrets, Book 1) by Chris Columbus
Chris Columbus
House of Secrets
Used - Very Good
Paperback
HarperCollins Publishers
2014-02-24
560
0007490151
9780007490158
N/A
Book picture is for illustrative purposes only, actual binding, cover or edition may vary.
This is a used book - there is no escaping the fact it has been read by someone else and it will show signs of wear and previous use. Overall we expect it to be in very good condition, but if you are not entirely satisfied please get in touch with us.