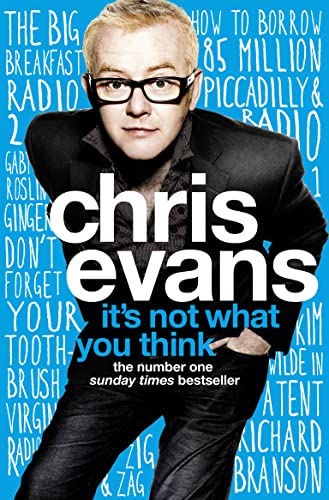 It's Not What You Think
by Chris Evans

The story of how one council estate lad made good, really very good, and survived - just about - to tell the tale...

It's Not What You Think Summary

It's Not What You Think by Chris Evans

The story of how one council estate lad made good, really very good, and survived - just about - to tell the tale...

Chris Evans's extraordinary career has seen him become one of the country's most successful broadcasters and producers. From The Big Breakfast to Don't Forget Your Toothbrush and TFI Friday, Chris changed the TV landscape during the `90s; and on Manchester's Piccadilly Radio, BBC Radio 1's Breakfast show and as owner of Virgin Radio he ushered in the age of the celebrity DJ.

But this is only part of the Chris Evans story. In this witty and energetically written autobiography, Chris describes the experiences that shaped the boy and created the man who would go on to carve out such a dazzlingly brilliant career. Born on a dreary council estate in Warrington and determined to escape, Chris started out as the best newspaper boy on the block, armed with no more than a little silver Binatone radio that he would take to the newsagents each day and through which he would develop a life-long and passionate love affair with the music and voices that emerged.

From paperboy to media mogul, It's Not What You Think isn't what you think - it's the real story beyond the glare of the media spotlight from one of this country's brightest and boldest personalities.

Customer Reviews - It's Not What You Think

It's Not What You Think Reviews

`It is as an autobiographer that Chris Evans finally seems to have grown up', The Observer

`Full to the brim with fantastic anecdotes', Heat

`A critic confounding mea culpa of a memoir', The Guardian

`The guy can spin a yarn as long as long as the M1 and as colourful as his hair', Now Magazine

Chris Evans began his broadcasting careeer at Manchester Piccadilly radio, going on to become a household name in TV and radio. With his production company Ginger, he launched and presented the hugely successful Channel 4 shows The Big Breakfast, Don't Forget Your Toothbrush and TFI Friday. In 1995 Chris joined Radio 1 hosting the flagship breakfast show, attracting 7.5m listeners. After his controversial departure he then joined Virgin Radio's breakfast show, eventually acquiring the station from Richard Branson for GBP87m. He went on to sell the Ginger Media Group (including Virgin Radio) in 2000 for GBP225m. In 2005 Chris joined Radio 2, declaring it his spiritual home, his show picking up four prestigious Sony Awards in as many years. He is now presenter of The Breakfast Show.

GOR001778838
It's Not What You Think by Chris Evans
Chris Evans
Used - Very Good
Paperback
HarperCollins Publishers
2010-04-29
352
0007327234
9780007327232
N/A
Book picture is for illustrative purposes only, actual binding, cover or edition may vary.
This is a used book - there is no escaping the fact it has been read by someone else and it will show signs of wear and previous use. Overall we expect it to be in very good condition, but if you are not entirely satisfied please get in touch with us.