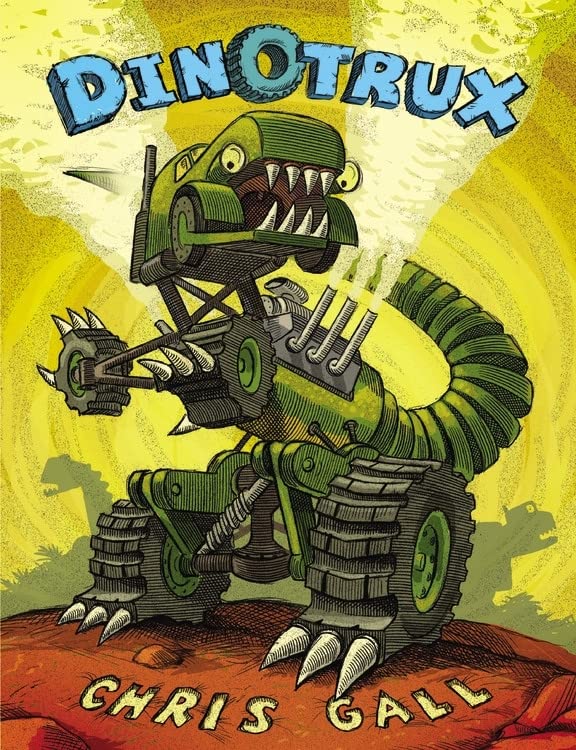 Out of Stock
$22.49
inc. GST
A creative spin on two child-favourite topics - trucks and dinosaurs - from renowned illustrator Chris Gall
Good
Only 0 left

Millions of years ago, DINOTRUX ruled the earth!

These mighty part-truck, part-dino demolition dynamos rumbled, plowed and bulldozed their way through the centuries. From the nosy Craneosaurus and hungry Garbageadon to the bully of the jungle, Tyrannosaurus Trux, Chris Gall guides you on a safari through the wild world of these mechanical monsters of prehistoric times. Feast your eyes upon these mighty mobile creatures that once ruled the earth, but now only rule the highways. Buckle up for the ride - you'll never look at Dad's rusty old pickup the same way again!

What happened to the Dinotrux? Find out in a fold-out gatefold detailing their evolution!


* "This title will be hard to keep on the shelves."-- School Library Journal, starred review

* "Dinotrux ruled their world, now they're likely to rule this one too. Bellow on!"-- Kirkus Reviews, starred review

Chris Gall is the illustrator of AMERICA THE BEAUTIFUL, DEAR FISH and THERE'S NOTHING TO DO ON MARS. He has received over 50 major awards from the likes of the Society of Illustrators, Communication Arts Magazine, The New York Art Directors Club and Print Magazine.

GOR007110004
Dinotrux by Chris Gall
Chris Gall
Used - Good
Hardback
Little, Brown & Company
2009-06-01
32
0316027774
9780316027779
N/A
Book picture is for illustrative purposes only, actual binding, cover or edition may vary.
This is a used book - there is no escaping the fact it has been read by someone else and it will show signs of wear and previous use. Overall we expect it to be in very good condition, but if you are not entirely satisfied please get in touch with us.