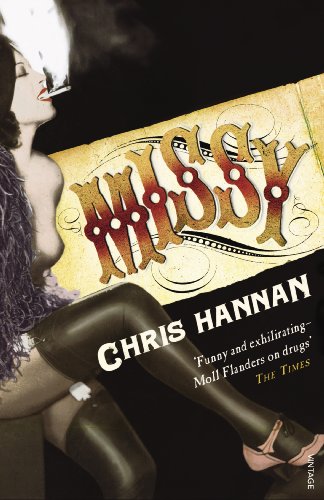 A rowdy, exuberant, badly behaved blast of an adventure, Missy begins in 1862 with Dol McQueen, nineteen-year-old flash girl and opium user, heading for a boom town in the American West.

A rowdy, exuberant, badly behaved blast of an adventure, Missy begins in 1862 with Dol McQueen, nineteen-year-old flash girl and opium user, heading for a boom town in the American West. On the way she prevents a man from hanging himself only to discover he is a murderous pimp.

When he turns up later at the saloon where she has found work with some stolen goods he wants her to hide, Dol grabs the chance to start a new life and takes off into the wilderness with the loot and all hell in pursuit. Her alcoholic mother is an added burden on the mad, epic journey: can Dol save herself, her mother and their poisonous relationship?

Like her literary predecessors, Becky Sharpe and Moll Flanders, Dol is a flawed but irresistible anti-heroine, and Missy is an astounding debut.

When a brilliant, award-winning Scottish playwright produces a first novel, you don't expect to be recommending it as a perfect beach read...Funny and exhilarating - Moll Flanders on drugs * The Times *
Narrated by one of the more luminous characters in recent fiction * Guardian *
A gorgeously sassy opening, it is surprising how winning, and how powerful, the voice of Dol McQueen, 19th-century American "flash-girl" actually is... Hannan has traversed the limits of history and given us a thoroughly modern woman * Independent *
Hannan is comparable to no playwright working today so much as the Renaissance masters. He has a density of expression, a control of populous scenes, a sense of dramatic development and a sheer verve which few writers, living or dead, can touch * Sunday Times *
An action-packed page-turner...riveting * Scotland on Sunday *

Missy is the first novel by playwright Chris Hannan. His award-winning plays include Shining Souls, The Evil Doers, Elizabeth Gordon Quinn and The Baby; and have been staged by the Royal Shakespeare Company, the National Theatre of Scotland and Sir Peter Hall at the Old Vic. In 2001/02 he was Judith E. Wilson Visiting Fellow in Drama at the University of Cambridge. He lives in Edinburgh.

GOR001673650
Missy by Chris Hannan
Chris Hannan
Used - Very Good
Paperback
Vintage Publishing
2009-07-02
304
0099501554
9780099501558
Winner of McKitterick Prize 2009
Book picture is for illustrative purposes only, actual binding, cover or edition may vary.
This is a used book - there is no escaping the fact it has been read by someone else and it will show signs of wear and previous use. Overall we expect it to be in very good condition, but if you are not entirely satisfied please get in touch with us.