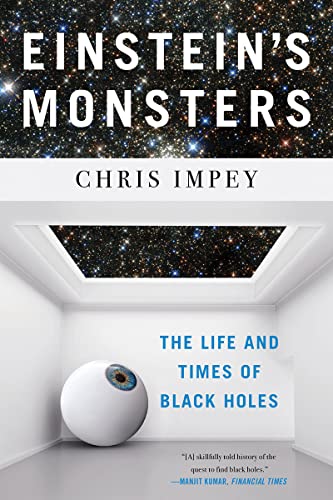 Einstein's Monsters
by Chris Impey (University of Arizona in Tucson)

In Stock
$19.49
inc. GST
The astonishing science of black holes, and their role in understanding the history and future of our universe.
Like New Very Good
Only 1 left

Einstein's Monsters: The Life and Times of Black Holes by Chris Impey (University of Arizona in Tucson)

Black holes are the most extreme objects in the universe, yet every galaxy harbours a black hole at its centre. In Einstein's Monsters, Chris Impey builds on this profound discovery to explore questions at the cutting edge of cosmology, such as what happens if you travel into a black hole and whether the galaxy or its black hole came first.

Impey chronicles the role black holes have played in theoretical physics. He then describes the phenomena that scientists have witnessed while observing black holes: dozens of stars swarming around the dark object at the centre of our galaxy; black holes performing gravitational waltzes with normal stars; the cymbal clash of two black holes colliding, releasing ripples in spacetime. Einstein's Monsters is the incredible story of one of the most enigmatic entities in nature.

"Black holes were originally flights of theoretical fancy, difficult for even professional physicists to wrap their brains around. In Einstein's Monsters, Chris Impey shows how modern astronomy has brought them into vivid focus, and conveys how much more we're learning about these extreme beasts with every passing year." -- Sean Carroll
"In Einstein's Monsters, Impey provides a history of black holes and an overview of investigations into their supremely counter-intuitive behaviour...[he] addresses the seeming absurdities of [the] subject with authority and wit." -- Nature
"Impey skilfully weaves a fascinating tale out of the work and ideas of the scientists who... pieced together the history of black holes by understanding the evolution of stars and how they can, depending on their mass, end up as white dwarfs, ultra-dense neutronstars, rapidly spinning pulsars or as an exploding supernova." -- Financial Times
"Einstein's Monsters cuts through the "fiendishly complex" mathematics to set out the evidence for black holes, and how they are born and die." -- Times Higher Education
"Impey does an admirable job describing multiple facets of the often contradictory field of black hole astrophysics... Einstein's Monsters will be sure to capture the imagination of most who pick it up, simultaneously convincing the reader that these monsters, while in fact quite certainly real, should be loved and not feared." -- Science
"The book gives an awe-inspiring account of the complexity and beauty of black holes that were there before our Galaxy formed and will probably be there after everything else has been shredded apart by the forces of an ever-expanding Universe." -- Nature
"Astronomer Impey's accessible approach breaks down complex scientific concepts with ease and flair, name-checking everyone from Edgar Allen Poe to Pink Floyd as he lays out what we think we know about black holes-and what remains mysterious." -- Discover

About Chris Impey (University of Arizona in Tucson)

Chris Impey is a distinguished professor in the Department of Astronomy at the University of Arizona and the critically-acclaimed author of Beyond, How It Began, and How It Ends, and four other books, as well as two astronomy textbooks. He lives in Tucson, Arizona.

GOR010449462
Einstein's Monsters: The Life and Times of Black Holes by Chris Impey (University of Arizona in Tucson)
Chris Impey (University of Arizona in Tucson)
Used - Like New
Paperback
WW Norton & Co
2019-09-17
304
0393357503
9780393357509
N/A
Book picture is for illustrative purposes only, actual binding, cover or edition may vary.
The book has been read, but looks new. The book cover has no visible wear, and the dust jacket is included if applicable. No missing or damaged pages, no tears, possible very minimal creasing, no underlining or highlighting of text, and no writing in the margins.