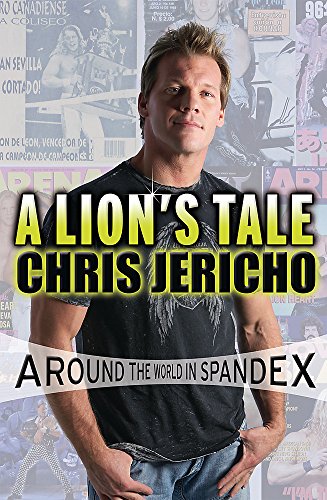 A Lion's Tale
by Chris Jericho

A Lion's Tale: Around the World in Spandex by Chris Jericho

Chris Jericho worked his way into the big time of wrestling after training in Canada. He had his first pro fight at just 19, but it wasn't until he was 25 that he made the big time, joining the WCW. Within a year he had won his first title. Finally, in August 1999 he moved to the WWF (now WWE) where he would eventually become one of the biggest names on their books, and bedcome the undisputed Heavyweight Champion.

In this fascinating account, he relives his early days in the sport in Mexico and Japan, and working his way up alongside Chris Benoit and Lance Storm. He also recalls his rivalries with The Rock, Steve Austin and Triple H among others. He retired from the sport in August 2005, but there have been many rumours since then of a comeback. A Lion's Tale is as honest, outspoken and direct as the man himself.

So charming and funny is Chris Jericho's journey from body-slammingly painful naivety to worldly wrestling champ, that his memoirs will leave cynics finding time for a private read. * GQ *
Almost certainly the best wrestling autobiography I?ve read, and I don?t give that accolade lightly. I?ve read this book several times and it?s not any less enjoyable... for anyone who enjoys wrestling or Jericho this is a must-read. * WRESTLING101.COM *
This is the first true epic of wrestling books and should be on the shelf of every true wrestling fan... Hilarious, empathetic, heart warming, gross, scary and down right bleeding interesting. * THEWRESTLINGTRUTH.COM *

Chris Jericho was born in November 1970 and made his wrestling debut at the age of 19. In 2001 he became the first undisputed champion of the WWE and is the only performer to have held six different titles in WWE's 45-year history. Now retired from the sport, he has starred in films, is the lead singer of the rock band Fozzy and has appeared in numerous comedy series. He is married and has three children.

GOR001868351
A Lion's Tale: Around the World in Spandex by Chris Jericho
Chris Jericho
Used - Very Good
Hardback
Orion Publishing Co
2007-01-01
432
0752891715
9780752891712
N/A
Book picture is for illustrative purposes only, actual binding, cover or edition may vary.
This is a used book - there is no escaping the fact it has been read by someone else and it will show signs of wear and previous use. Overall we expect it to be in very good condition, but if you are not entirely satisfied please get in touch with us.