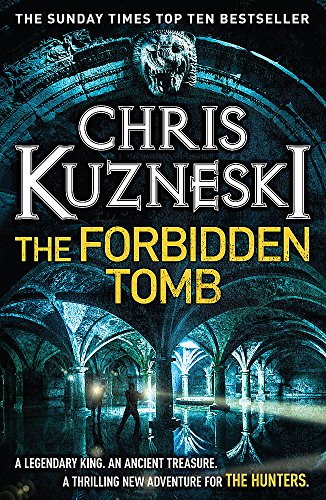 The Forbidden Tomb (The Hunters 2)
by Chris Kuzneski

The Forbidden Tomb (The Hunters 2) Summary

The Forbidden Tomb (The Hunters 2) by Chris Kuzneski

THE HUNTERS
If you seek, they will find...

For two thousand years, Alexander the Great's legendary tomb - and the extraordinary riches within - has remained hidden, but recent events hold the key to locating the fabled vault. Only one team can solve the mystery that has plagued historians for centuries.

The Hunters - an elite group assembled by an enigmatic billionaire to locate the world's greatest treasures - are tasked with finding the tomb. Following clues to Egypt, they encounter hostile forces determined to stop them. What started as a treasure hunt quickly becomes a rescue mission that will take the lives of hundreds and leave a city in ruins.

As the danger mounts, will the Hunters rise to the challenge?
Or will the team be killed before they find the ultimate prize?

The Forbidden Tomb (The Hunters 2) Reviews

THE HUNTERS kicks off a brilliant new series from Chris Kuzneski. Adventure, history, mystery, and more - everything you'd want in a thriller! -- Scott Mariani
Kuzneski does it again with another terrific tale, filled with action and deception, bringing the unimaginable to life. Definitely my kind of story! -- Steve Berry
If Indiana Jones joined the crew of Mission Impossible, you'd get the action, history, and wicked sense of humor in THE HUNTERS. With a thrill ride that pins you to your seat until the very last page, Chris Kuzneski sets a new standard for adventure -- Boyd Morrison
Makes you wish it would never end -- Clive Cussler
Not to be missed -- Lee Child
Kuzneski's writing has raw power -- James Patterson
A thriller writer for the new millenium -- James Rollins
Explosive -- Doug Preston

Chris Kuzneski is the international bestselling author of numerous thrillers featuring the series characters Payne and Jones, including THE SECRET CROWN and THE EINSTEIN PURSUIT. He is also the author of THE HUNTERS, the first novel in an electrifying series that continues with THE FORBIDDEN TOMB and THE PRISONER'S GOLD. Chris's thrillers have been translated into more than twenty languages and are sold in more than forty countries. Chris grew up in Pennsylvania but currently lives on the Gulf Coast of Florida.

GOR006160263
The Forbidden Tomb (The Hunters 2) by Chris Kuzneski
Chris Kuzneski
The Hunters
Used - Very Good
Paperback
Headline Publishing Group
2014-10-09
560
0755386574
9780755386574
N/A
Book picture is for illustrative purposes only, actual binding, cover or edition may vary.
This is a used book - there is no escaping the fact it has been read by someone else and it will show signs of wear and previous use. Overall we expect it to be in very good condition, but if you are not entirely satisfied please get in touch with us.