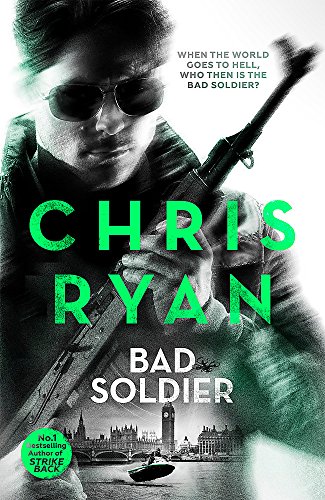 Used Price
$20.89
inc. GST
Free Shipping in Australia
When the world goes to hell, who then is the bad soldier?
Very Good Good

A migrant boat battles through the rough Mediterranean. Its passengers are desperate, starving and scared.

They are also being ruthlessly targeted by the SAS.

Islamic State militants are smuggling themselves into Europe using these boats. Only by locating such men before they make it into the UK can the Regiment stop them committing their acts of terror on British soil.

When one of these migrants reveals plans for a sickening Christmas Day atrocity in London, SAS operative Danny Black is tasked with infiltrating the most dangerous theatre of war in the world: Islamic State heartland. There, he and his team must lift a brutal IS commander - the only man who knows all the details of the London attack. The commander surrounds himself with vicious militants and a harem of sex slaves whom he treats in the most sadistic ways imaginable. And his jihadi wife is, if possible, even more abominable than him.

As Danny pits himself against the violent thugs of the Islamic State, he learns that it is not just the UK that is under threat. His very presence on the mission has put at risk the safety of those closest to him. And he discovers that there are greater forces at work here, who do not care if the innocent live or die.

Now there is nothing Danny will not do, no line he will not cross, to protect his family. Whether that makes him a good soldier or a bad soldier he neither knows nor cares. Because as he is fast learning, it is sometimes impossible to tell the difference between the two.

And as every SAS soldier is trained to understand, the worst threats often come from the most unexpected places...

'first rate set operational pieces' * Sunday Times *
Praise for Chris Ryan * : *
Ryan chooses fiercely up-to-the-minute plots, and laces them with an exceptional eye for detail and insider knowledge ... Fearsome and fast-moving. * Daily Mail *
A shockingly authentic tale to keep your adrenaline pumping as fast as the blood on the pages. * The Sun *
Nobody takes you to the action better than Ryan, because he's the real deal, and this muscle-and-bone thriller will have fans' blood pumping. * Evening Standard *

Former SAS corporal and the only man to escape death or capture during the Bravo Two Zero operation in the 1991 Gulf War, Chris Ryan turned to writing thrillers to tell the stories the Official Secrets Act stops him putting in his non-fiction. His novels have gone on to inspire the Sky One series Strike Back. Born near Newcastle in 1961, Chris Ryan joined the SAS in 1984. During his ten years there he was involved in overt and covert operations and was also sniper team commander of the anti-terrorist team. During the Gulf War, Chris Ryan was the only member of an eight-man unit to escape from Iraq, where three colleagues were killed and four captured. It was the longest escape and evasion in the history of the SAS. For this he was awarded the Military Medal. He wrote about his experiences in the bestseller The One That Got Away, which was adapted for screen, and since then has written three other works of non-fiction, over twenty bestselling novels and a series of childrens' books.

GOR007653052
Bad Soldier: Danny Black Thriller 4 by Chris Ryan
Chris Ryan
Danny Black
Used - Very Good
Hardback
Hodder & Stoughton
2016-08-25
384
1444783378
9781444783377
N/A
Book picture is for illustrative purposes only, actual binding, cover or edition may vary.
This is a used book - there is no escaping the fact it has been read by someone else and it will show signs of wear and previous use. Overall we expect it to be in very good condition, but if you are not entirely satisfied please get in touch with us.