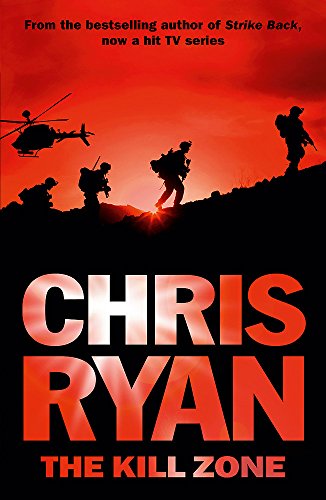 The Kill Zone by Chris Ryan

The new white knuckle ride of a thriller from the godfather and authentic voice of the SAS and the military.

The Kill Zone: A blood pumping thriller by Chris Ryan

From the author of the bestselling Danny Black series and the hit TV show Strikeback.

The guys in the Regiment know they face their fiercest enemies when they fight the Taliban. No-one is tougher, more deadly - or more cunning. And if they enter the Taliban's kill zone, they know just what to expect...

When three deadly Stinger missiles go missing in Helmand Province, the Regiment is tasked to retrieve the weapons at all costs. SAS legend Jack Harker has a mission to lead an eight-man team into a suspected Taliban facility. He's suspicious about what the aims of the mission really are - and it's about to get noisy.

Meanwhile, in Belfast, Siobhan Byrne, a highly trained surveillance operative, is infiltrating the drug crew of a former IRA commander. But are her motives professional or personal? Even she doesn't know any more.

Neither Jack nor Siobhan can guess just how closely linked their operations are about to become, or just what's at stake. But as the President of the United States makes plans to visit the UK, a devastating plot unfolds.

A shockingly authentic tale to keep your adrenalin pumping as fast as the blood on the pages. * Sun *
A shockingly authentic tale to keep your adrenalin pumping as fast as the blood on the pages. * Sun *
Nobody takes you to the action better than Ryan, because he's the real deal, and this muscle-and-bone thriller will have fans' blood pumping. * Evening Standard *
Former SAS corporal and the only man to escape death or capture during the Bravo Two Zero operation in the 1991 Gulf War, Chris Ryan turned to writing thrillers to tell the stories the Official Secrets Act stops him putting in his non-fiction. His novels have gone on to inspire the Sky One series Strike Back. Born near Newcastle in 1961, Chris Ryan joined the SAS in 1984. During his ten years there he was involved in overt and covert operations and was also sniper team commander of the anti-terrorist team. During the Gulf War, Chris Ryan was the only member of an eight-man unit to escape from Iraq, where three colleagues were killed and four captured. It was the longest escape and evasion in the history of the SAS. For this he was awarded the Military Medal. He wrote about his experiences in the bestseller The One That Got Away, which was adapted for screen, and since then has written three other works of non-fiction, over twenty bestselling novels and a series of children's books.
GOR002514523
9781444710267
1444710265
The Kill Zone: A blood pumping thriller by Chris Ryan
Chris Ryan
Used - Very Good
Paperback
Hodder & Stoughton
2016-04-07
416
N/A
Book picture is for illustrative purposes only, actual binding, cover or edition may vary.
This is a used book - there is no escaping the fact it has been read by someone else and it will show signs of wear and previous use. Overall we expect it to be in very good condition, but if you are not entirely satisfied please get in touch with us
Trustpilot