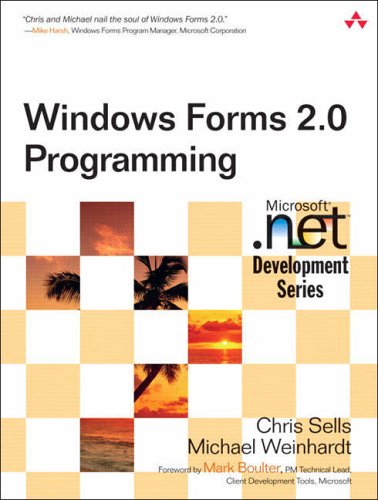 Out of Stock
$67.99
inc. GST
Teaches how to build and deploy leading-edge Windows Forms 2.0 applications. This book is suitable for those who are new to the technology or experienced developers who want to learn what's new in Version 2.0.
Very Good
Only 0 left

Any Windows programmer using .NET will need to deal with Windows Forms, also known as WinForms. And use of .NET among Windows programmers continues to grow at a rapid pace. The bestselling book on WinForms 1.X, and by far the best reviewed one, was Chris Sells' book. Chris and his coauthor, Mike Weinhardt, have updated it completely for the just released WinForms 2.0. The first edition was so successful in fact that there will be much less competition for this new edition. It is almost twice as long, reflecting the increased complexity of WinForms 2.0 and the number of changes made. It is also much more timely, coming out just a few months after the release of the product; it should be the first book on WinForms 2.0 tested completely against the final release code, not just the Beta 2 code. Given the amount of changes in WinForms 2.0, people who have already purchased the first edition will want the new edition, not just programmers just starting with .NET. So all in all, this book should sell even better than the very successful first edition did.

Michael Weinhardt is a programmer/writer at Microsoft, working on the Windows Client SDK. Michael has coauthored a variety of articles with Chris, contributed to the "Wonders of Windows Forms" column at MSDN Online, reviewed several Windows technology books, and generally loves communicating the whys and wherefores of technology to his peers. Michael is sure that his parents attribute his fascination in technology to their purchase of an Amiga 1000 in the mid-80s. They would be right.

About the Authors xxv

GOR002197765
Windows Forms 2.0 Programming by Chris Sells
Chris Sells
Used - Very Good
Paperback
Pearson Education (US)
2006-05-16
1032
0321267966
9780321267962
N/A
Book picture is for illustrative purposes only, actual binding, cover or edition may vary.
This is a used book - there is no escaping the fact it has been read by someone else and it will show signs of wear and previous use. Overall we expect it to be in very good condition, but if you are not entirely satisfied please get in touch with us.