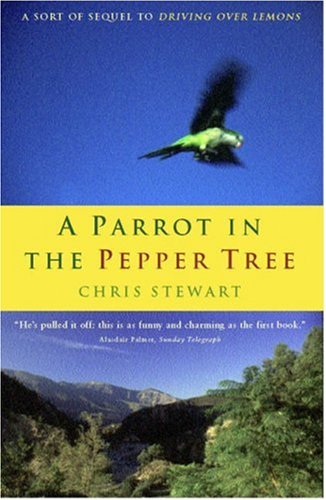 A Parrot in the Pepper Tree
by Chris Stewart

Out of Stock
$13.49
inc. GST
Looks back on the author's former life - the hard times shearing in midwinter Sweden (and driving across the frozen sea to reach island farms); his first taste of Spain, learning flamenco guitar as a 20-year old; and his illustrious music career.
Like New
Only 0 left

A Parrot in the Pepper Tree Summary

A Parrot in the Pepper Tree: A Sequel to Driving over Lemons by Chris Stewart

Chris Stewart'sDRIVING OVER LEMONS told the story of his move to a remote mountain farm in Las Alpujarras - an oddball region of Spain, south of Granada. Funny, insightful and real, the book became an international bestseller. A PARROT IN A PEPPER TREE, the sequel to Lemons, follows the lives of Chris, Ana and their daughter, Chloe, as they get to grips with a misanthropic parrot who joins their home, Spanish school life, neighbours in love, their amazement at Chris appearing on the bestseller lists . . and their shock at discovering that their beloved valley is once more under threat of a dam. A Parrot in the Pepper Tree also looks back on Chris Stewart's former life - the hard times shearing in midwinter Sweden (and driving across the frozen sea to reach island farms); his first taste of Spain, learning flamenco guitar as a 20-year old; and his illustrious music career, drumming for his schl band Genesis (sacked at 17, he never quite became Phil Collins), and then for a circus.

A Parrot in the Pepper Tree Reviews

It is everything that made the first book so hugely successful - endearing, heartwarming, self-deprecating, sometimes surreal. -- William Leith * Evening Standard *
He's pulled it off: this is as funny and charming as the first book. -- Alasdair Palmer * Sunday Telegraph *
A GIANT FOR 2002. The chapters I saw were wonderful. -- Sarah Broadhurst * The Bookseller *
Chris Stewart's story cannot be told too often. * The Times *
An unexpected gem of a book, written with a mix of insight and self-deprecation that echoes Bill Bryson at his funniest. * Dundee Evening Telegraph & Post *
Stewart never patronises, he just observes . . . funny, generous and warm . -- Sue Arnold * Guardian *
A brilliant follow-up. * The Bookseller *
Easily the best and funniest of all those otherwise wearisome expatriate diaries. * Independent on Sunday *
All quite delightful and slips down as easily as a small bottle of Spanish Beer. -- Giles Foden * Conde Naste Traveller *

Chris Stewart prepared for life on a mountain farm in Spain with jobs of doubtful relevance. After leaving Genesis (he drummed on the first album), he joined a circus, learnt how to shear sheep, crewed a yacht in Greece, went to China for the Rough Guides, gained a pilot's license in Los Angeles, and completed a course in French cking. Despite the extraordinary success of his first two books, Chris, Ana and their daughter Chloee continue to live on their farm, with their numerous dogs, cats, chickens, sheep and one misanthropic parrot.

GOR010391297
A Parrot in the Pepper Tree: A Sequel to Driving over Lemons by Chris Stewart
Chris Stewart
Used - Like New
Paperback
Sort of Books
2002-06-01
240
095352275X
9780953522750
Short-listed for WH Smith Book Awards (Travel Writing) 2003
Book picture is for illustrative purposes only, actual binding, cover or edition may vary.
The book has been read, but looks new. The book cover has no visible wear, and the dust jacket is included if applicable. No missing or damaged pages, no tears, possible very minimal creasing, no underlining or highlighting of text, and no writing in the margins.