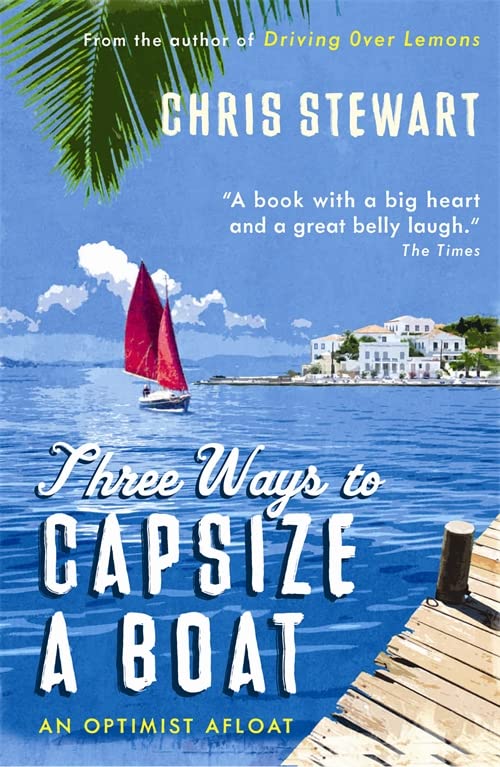 Three Ways to Capsize a Boat
by Chris Stewart

Three Ways to Capsize a Boat: An Optimist Afloat by Chris Stewart

Chris Stewart's sea-faring 'prequel' to Driving Over Lemons was launched into the hardback bestseller list in May, where it's been bobbing about happily ever since. Sort of Books plan to make this paperback plain sailing too. It will be published in the same format and price as his ever popular Spanish trilogy.

Laugh yourself silly! Wonderful! * Books Quarterly *
Witty, self-deprecating and charming, Stewart makes wonderful company even if you do get soaked in the process. It's a book with a big heart and a great belly laugh -- Kathleen Wyatt * The Times *
A charming and lyrical read, awash with the joy of discovery...I've never read a funnier description than his detailed advice on How to Pee at Midnight during a Force -- Rory Maclean * Guardian *
It is easy to enthuse about the simple pleasures of life, but hard to write about them well. Stewart's gift is to do so with the carefree manner of someone you've just met in a bar, and who is buying the drinks -- Hugh Thomson * Independent *
His enthusiasm and sheer good nature are infectious and, like Bill Bryson, with whom he's sometimes compared, he's a hard man to dislike * Mail on Sunday *
This is a lovely little book... you really get a sense of what it's like aboard an ocean-going sailing ship -- Sam Leith * Daily Mail *

Chris Stewart shot to fame with Driving Over Lemons (9780956003805) - Sort Of Books' launch title in 1999. Funny, insightful and real, the book told the story of how he bought a peasant farm on the wrong side of the river, with its previous owner still resident. It became an international bestseller and with its sequels - A Parrot in the Pepper Tree and The Almond Blossom Appreciation Society - it has sold more than a million copies in the UK alone. Chris prepared for life on his Spanish mountain farm with jobs of doubtful relevance. He was the original drummer in Genesis (he played on the first album), then joined a circus, learnt how to shear sheep, went to China to write the Rough Guide, gained a pilot's license in Los Angeles, and completed a course in French cooking. Three Ways to Capsize a Boat fills in his lost years as a yacht skipper in the Greek islands. Despite the extraordinary success of his books, Chris, his wife Ana, and their daughter Chloe, continue to live on their farm, with their numerous dogs, cats, chickens, sheep and misanthropic parrot.

GOR002036609
Three Ways to Capsize a Boat: An Optimist Afloat by Chris Stewart
Chris Stewart
Used - Very Good
Paperback
Sort of Books
2010-05-06
180
0956003842
9780956003843
N/A
Book picture is for illustrative purposes only, actual binding, cover or edition may vary.
This is a used book - there is no escaping the fact it has been read by someone else and it will show signs of wear and previous use. Overall we expect it to be in very good condition, but if you are not entirely satisfied please get in touch with us.