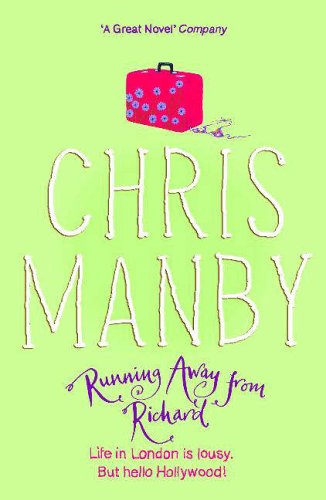 Running Away From Richard
by Chrissie Manby

Running Away From Richard Summary

Running Away From Richard by Chrissie Manby

Recently graduated from drama school, Lizzie Jordan is looking forward to a glittering career at the RSC. She's also looking forward to the next step in her relationship: becoming Mrs Richard Adams (Lizzie just knows that her artist boyfriend is about to propose any day now).

So how does Lizzie, just one month later, find herself sharing a cockroach-infested house in Venice Beach, California, working as a waitress in a transvestite bar, and pretending to be the fiancee of one of the biggest directors in Hollywood? Why does life never seem to work out the way Lizzie Jordan planned?

'A great novel for anyone who's ever been dumped' - Company

Running Away From Richard Reviews

A laugh-every-page, romping read. Excellent! * B *
A great novel * Company *
A great novel for anyone who's ever been dumped * Company *
A fun romp - perfect holiday reading * Woman's Way - Dublin *
Very funny, hugely feel-good, and the perfect antidote to anyone who worries that the only career ladder they've achieved is a run in their tights * Fiona Walker on LIZZIE JORDAN'S SECRET LIFE *
In the best tradition of Kathy Lette, this is girl power at its most painfully funny * Helen Lederer on DEEP HEAT *

Chrissie Manby is the author of twenty five romantic comedies including A PROPER FAMILY HOLIDAY, THE MATCHBREAKER and SEVEN SUNNY DAYS. She has had several Sunday Times bestsellers and her novel about behaving badly after a break-up, GETTING OVER MR RIGHT, was nominated for the 2011 Melissa Nathan Award. Chrissie was raised in Gloucester, in the west of England, and now lives in London. Contrary to the popular conception of chick-lit writers, she is such a bad home-baker that her own father threatened to put her last creation on www.cakewrecks.com. She is, however, partial to white wine and shoes she can't walk in. You can follow her on Twitter @chrissiemanby, or visit her website www.chrissiemanby.co.uk to find out more.

GOR001630977
Running Away From Richard by Chrissie Manby
Chrissie Manby
Used - Very Good
Paperback
Hodder & Stoughton General Division
2005-10-10
432
0340837217
9780340837214
N/A
Book picture is for illustrative purposes only, actual binding, cover or edition may vary.
This is a used book - there is no escaping the fact it has been read by someone else and it will show signs of wear and previous use. Overall we expect it to be in very good condition, but if you are not entirely satisfied please get in touch with us.