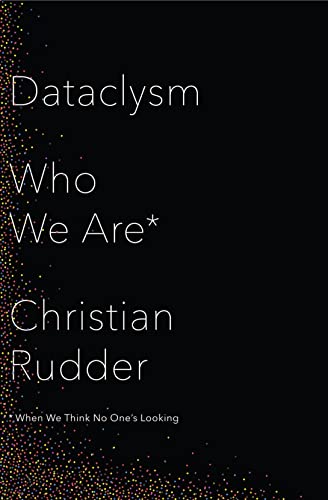 An irreverent, provocative, and visually fascinating look at what our online lives reveal about who we really are - and how this deluge of data will transform the science of human behaviour.

Dataclysm: Who We Are (When We Think No One's Looking) by Christian Rudder

An irreverent, provocative, and visually fascinating look at what our online lives reveal about who we really are - and how this deluge of data will transform the science of human behaviour.

Big Data is used to spy on us, hire and fire us, and sell us things we don't need. In 'Dataclysm', Christian Rudder, founder of one of the world's biggest dating websites OkCupid, puts this flood of information to an entirely different use: understanding human nature.

Drawing on terabytes of data from Twitter, Facebook, Reddit, OkCupid, and many other sites, Rudder examines the terrain of human experience to answer a range of questions: Does it matter where you went to school? How racist are we? How do political views alter relationships? Philosophers, psychologists, gene hunters and neuroscientists have tried to explain our flaws and foibles. Rudder shows that in today's era of social media, a powerful new approach is possible, one that reveals how we actually behave when we think no one's looking.

Outrageous and illuminating, 'Dataclysm', is a portrait of our essential selves - dark, absurd, occasionally noble - and a first look at a revolution in the making.

'This is the best book that I've read on data in years, perhaps ever. If you want to understand how data is affecting the present and what it portends for the future, buy it now' Huffington Post

'At a time when consumers are increasingly wary of online tracking, Rudder makes a powerful argument in Dataclysm that the ability to tell so much about us from the trails we leave is as potentially useful as it is pernicious, and as educational as it may be unsettling. By explaining some of the insights he has gleaned from OkCupid and other social networks, he demystifies data-mining and sheds light on what, for better or for worse, it is now capable of' Financial Times

'Most data-hyping books are vapour and slogans. This one has the real stuff: actual data and actual analysis taking place on the page. That's something to be praised, loudly and at length. Praiseworthy, too, is Rudder's writing, which is consistently zingy and mercifully free of Silicon Valley business gabble' Washington Post

'Fascinating, funny, and occasionally howl-inducing...[Rudder] is a quant with soul, and we're lucky to have him' Elle

'There's another side of Big Data you haven't seen ... It's the big data that rears its ugly head and tells us what we don't want to know. And that, as Christian Rudder demonstrates in his new book, Dataclysm, is perhaps an equally worthwhile pursuit. Before we heighten the human experience, we should understand it first' TIME

'Dataclysm is a well-written and funny look at what the numbers reveal about human behavior in the age of social media. It's both profound and a bit disturbing, because, sad to say, we're generally not the kind of people we like to think - or say - we are' Salon

'[Rudder] doesn't wring or clap his hands over the big-data phenomenon (see N.S.A., Google ads, that sneaky Fitbit) so much as plunge them into big data and attempt to pull strange creatures from the murky depths' New Yorker

Christian Rudder is co-founder of OkCupid and now serves as chief data analyst and author of the popular blog OkTrends. He graduated from Harvard in 1998 with degrees in English and math, and served as creative director for SparkNotes. His work has been written about in the New York Times and the New Yorker, among other places. He lives in Brooklyn with his wife and daughter.

GOR006750107
9780008101008
0008101000
Dataclysm: Who We Are (When We Think No One's Looking) by Christian Rudder
Christian Rudder
Used - Very Good
Hardback
HarperCollins Publishers
2014-09-11
304
N/A
Book picture is for illustrative purposes only, actual binding, cover or edition may vary.
This is a used book - there is no escaping the fact it has been read by someone else and it will show signs of wear and previous use. Overall we expect it to be in very good condition, but if you are not entirely satisfied please get in touch with us
Trustpilot