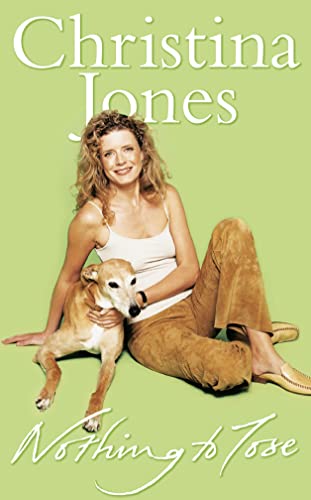 Nothing to Lose
by Christina Jones

Our third exhilarating novel from the author of Walking on Air.

Nothing to Lose Summary

Nothing to Lose by Christina Jones

Our third exhilarating novel from the author of Walking on Air.

Christina Jones specialises in robust yet romantic heroines, unusual situations like acrobatic flying or fairgrounds, and remarkable casts of supporting players who are highly realistic - indeed very similar to one's lunatic uncle for example - but rendered with great affection. As so many of her readers say - one always feels a great deal better for reading a Christina Jones novel.

Here Jasmine Clark inherits on the death of her grandfather, various bits of his businesses, including to the horror of her family, his bookie's pitch at a local greyhound stadium, as well as his council-condemned beach-hut. The stadium may look rundown, but there are plans afoot and it's a prime site close to the sea-front.

April Pagett, single mother, has been nursing her bar job, and any other work she can get, including debt collection, to survive until one day, in lieu of payment, she is given Cair Paravel, allegedly a champion greyhound. The owner scarpers and April is left to conceal the dog from her landlord. So is he a winner?

Debt collectors and developers, posh relations and bookmakers, possible husbands, and bar-owners, the owners and the punters, and of course the girls and the greyhound are all involved in a wonderful chase - with nothing to lose.

Christina Jones, brought up in a circus family, wrote short stories for some time before being encouraged to write her first novel, Going the Distance, which became a highly successful WHS Fresh Talent entry. She is married and lives outside Oxford.

GOR000818680
Nothing to Lose by Christina Jones
Christina Jones
Used - Very Good
Paperback
HarperCollins Publishers
2001-05-08
432
0006513638
9780006513636
N/A
Book picture is for illustrative purposes only, actual binding, cover or edition may vary.
This is a used book - there is no escaping the fact it has been read by someone else and it will show signs of wear and previous use. Overall we expect it to be in very good condition, but if you are not entirely satisfied please get in touch with us.