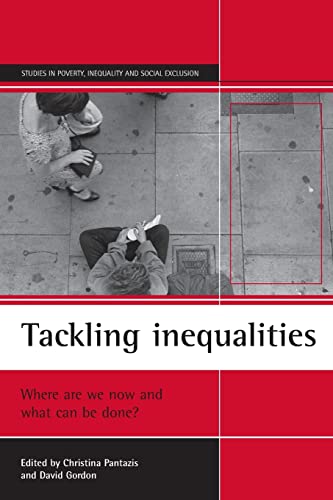 Used Price
$26.49
inc. GST
Free Shipping in Australia
This challenging book brings together contributions from leading poverty analysts on inequalities in income, wealth, standard of living, employment, education, housing, crime and health. It charts the extent of the growth in inequalities and offers a coherent critique of the New Labour government's policies aimed at those tackling this crisis.
Reviews:
Trustpilot
Very Good

Tackling inequalities: Where are we now and what can be done? by Christina Pantazis

The growing divide between the poor and the rich is the most significant social change to have occurred during the last few decades. The new Labour government inherited a country more unequal than at any other time since the Second World War. This book brings together a collection of contributions on inequalities in the main areas of British life: income, wealth, standard of living, employment, education, housing, crime and health. It charts the extent of the growth in inequalities and offers a coherent critique of the new Labour government's policies aimed at those tackling this crisis. In particular, the numerous area-based anti-poverty policies currently being pursued are unlikely to have a significant and long-lasting effect, since many lessons from the past have been ignored. The contributors use and interpret official data to show how statistics are often misused to obscure or distort the reality of inequality. A range of alternative policies for reducing inequalities in Britain are discussed and set within the global context of the need for international action. Tackling inequalities is a valuable contribution to the emerging policy debate written by the leading researchers in the field. It is essential reading for academics, policy makers, and students with an interest in inequalities, poverty and social exclusion. Studies in poverty, inequality and social exclusion series Series Editor: David Gordon, Director, Townsend Centre for International Poverty Research. Poverty, inequality and social exclusion remain the most fundamental problems that humanity faces in the 21st century. This exciting series, published in association with the Townsend Centre for International Poverty Research at the University of Bristol, aims to make cutting-edge poverty related research more widely available. For other titles in this series, please follow the series link from the main catalogue page.

"... a very clearly written and accessible book, which at the same time manages to present a range of key issues and pack in lots of factual information." Politics Included
"An excellent contribution to the ongoing policy debate surrounding social exclusion and how best to tackle it." British Sociological Association Network Magazine
"The original ideas in this book cut through the usual quick-sand performance indicators. They challenge the conventional assumption of progress towards equality. But they do so with a practical edge that will appeal to those monitoring and implementing social policies." Ludi Simpson, Cathie Marsh Centre for Census and Survey Research, University of Manchester
"A refreshing read, this book pulls no punches in charting the rise of poverty and social inequalities in Britain under the Conservatives and in exposing how official statistics were used to obscure the trend; nor in analysing the retreat of New Labour from redistributionist aims and the continuities between the 'Third Way' and Thatcherism ... an essential book for those concerned with policy analysis in relation to social justice and equality." Jay Ginn

David Gordon is Professor of Social Justice and the Director of the Townsend Centre for International Poverty Research at the University of Bristol. He is co-editor of Breadline Europe and World Poverty (with Peter Townsend) Christina Pantazis is a Research Fellow in the School for Policy Studies at the University of Bristol. She is co-editor of Breadline Britain (with David Gordon).

GOR001949289
Tackling inequalities: Where are we now and what can be done? by Christina Pantazis
Christina Pantazis
Studies in Poverty, Inequality and Social Exclusion Series
Used - Very Good
Paperback
Policy Press
2000-01-01
256
1861341466
9781861341464
N/A
Book picture is for illustrative purposes only, actual binding, cover or edition may vary.
This is a used book - there is no escaping the fact it has been read by someone else and it will show signs of wear and previous use. Overall we expect it to be in very good condition, but if you are not entirely satisfied please get in touch with us.