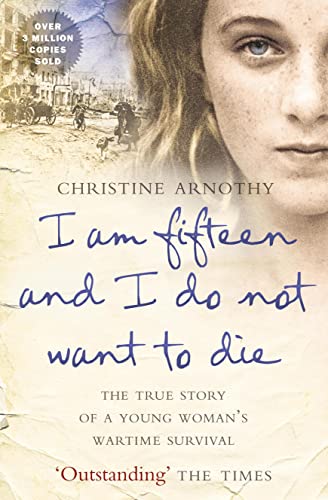 The compelling and moving narrative of a young girl caught by the tides of marching armies during the siege of Budapest in 1945.

I am fifteen and I do not want to die Summary

I am fifteen and I do not want to die: The True Story of a Young Woman's Wartime Survival by Christine Arnothy

The compelling and moving narrative of a young girl caught by the tides of marching armies during the siege of Budapest in 1945.

Told with calm compulsive force, and with an intimacy and maturity that defies the author's youth, I am fifteen is a poignant coming-of-age memoir, and a remarkable tale of ordinary lives destroyed by war.

Budapest in early 1945: the siege - which was to kill some 40,000 civilians - raged around Christine Arnothy, her family and the various inhabitants of their building. Hiding in cellars, venturing out in a desperate search for food and water only when the noise of battle momentarily receded, they wondered if the Germans from the West or the Russians from the East would be victorious and under which they would fare best.

Praying she would survive, and mourning the loss of some of her fellow refugees, Christine found solace in her writing - in pencil on a small notepad in the cellar - and dreamt of becoming a writer at the end of the war.

Her subsequent adventures include a dramatic escape over the frontier into Austria, to Vienna and freedom (or so she imagined); then the difficult decision to leave her parents in an Allied refugee camp, while she searched for a new life in Paris.

I am fifteen and I do not want to die Reviews

`Outstanding in the literature of war. It has the abruptness, shadows and tensions of the best films, but superimposed is the knowledge that the cruelty and destruction are true.'
The Times

`She is one of the few writers capable of describing what it feels like to be an innocent sufferer under Communism. It is well worth reading for its brilliant descriptions of past horrors and present misery. She has told this story with evident honesty and fine reporting skill.'
Manchester Guardian

`This book has won the Prix Verite. There could not have been a better choice for it merits this honour and will take its place among the best books written on the war.'
Die Andere Zeitung, Hamburg

`One has the feeling on reading this book that nothing in it is false or invented, but that it is absolutely sincere.'
Il Ragguagio Librario, Italy

`She writes with simplicity and an overwhelming sincerity.
Livres de France

Christine Arnothy, daughter of an Austro-Hungarian father and a German-Polish mother, was born in Budapest in 1930. She now lives in Switzerland.

GOR002003275
I am fifteen and I do not want to die: The True Story of a Young Woman's Wartime Survival by Christine Arnothy
Christine Arnothy
Used - Very Good
Paperback
HarperCollins Publishers
2010-04-01
320
0007328672
9780007328673
N/A
Book picture is for illustrative purposes only, actual binding, cover or edition may vary.
This is a used book - there is no escaping the fact it has been read by someone else and it will show signs of wear and previous use. Overall we expect it to be in very good condition, but if you are not entirely satisfied please get in touch with us.