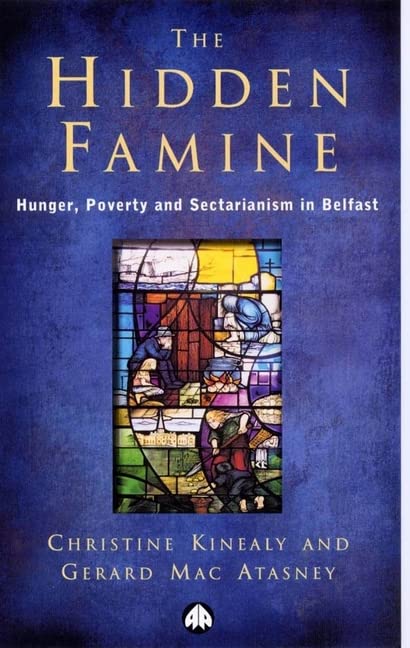 The Hidden Famine
by Christine Kinealy

Used Price
$59.99
inc. GST
Free Shipping in Australia
Written by one of the outstanding historians of modern Ireland, The Hidden Famine examines the impact of Ireland's Great Famine on the city of Belfast.
Reviews:
Trustpilot
Very Good

The Hidden Famine: Hunger, Poverty and Sectarianism in Belfast 1840-50 by Christine Kinealy

Between 1845 and 1852 Ireland was devastated by the 'Great Hunger' - the most severe famine in modern European history. The view widely held by historians is that the impact of the Famine on the northern province of Ulster, in particular the largely Protestant city of Belfast, was minimal. In the first book on the Famine to focus specifically on Belfast, Christine Kinealy, one of Ireland's leading historians of the period, and Gerard MacAtasney, challenge this view and offer a new interpretation. Drawing on a wealth of original research, Kinealy and MacAtasney begin with an examination of society and social behaviour in Belfast prior to 1845. They then assess the official response to the crisis by the British government, the response by the Church in both England and Ireland, and the part played by the local administration in Ulster. The authors examine the impact of the cholera epidemic on Belfast in 1849-50, the city's recovery after the Famine, and the beginnings of open sectarianism among the business and landed classes of the province.

Dr Christine Kinealy teaches history at the University of Central Lancashire and has also taught at the University of Liverpool and universities in Dublin and Belfast. She is the author of The Great Calamity: The Irish Famine, 1845-52 (Roberts Reinhart, 1994) and has written for History Ireland and the New York-based Irish Echo. Gerard Mac Atasney is currently completing a doctoral thesis on the famine in County Armagh. He is the author of a number of articles on the Famine, and two previous books, The Famine in Lurgan/Portadown (Beyond the Pale Publications, 1997) and Leitrim and the Great Hunger (Carrick Historical Society, 1997).

Acknowledgments Introduction Part I. The 'Old' Poor Law c. 1640-1845 1. Poverty before the Famine Part II. A National Crisis. c.1845-47. 2. A Man-Made Famine. 3. All the Horrors of Famine. 4. An Droch-Shaol . Disease and Death in Black '47. Part III. A Divided Town. 5. Public and Private Responses 6. Conflict and Rebellion. 7. The Crisis is Passed. Aftermath. Appendices Further Reading Index

GOR005880290
The Hidden Famine: Hunger, Poverty and Sectarianism in Belfast 1840-50 by Christine Kinealy
Christine Kinealy
Used - Very Good
Paperback
Pluto Press
2000-01-26
256
074531371X
9780745313719
N/A
Book picture is for illustrative purposes only, actual binding, cover or edition may vary.
This is a used book - there is no escaping the fact it has been read by someone else and it will show signs of wear and previous use. Overall we expect it to be in very good condition, but if you are not entirely satisfied please get in touch with us.