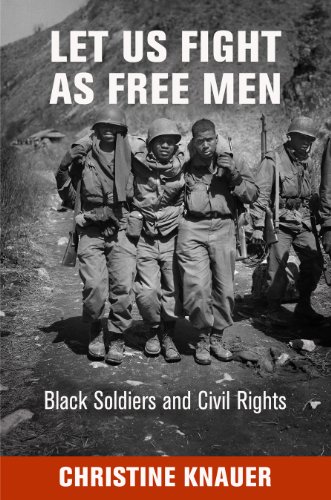 Let Us Fight as Free Men by Christine Knauer

Let Us Die as Free Men explores the African American fight for the desegregation of the American military between the Second World War and the Korean War. The book credits black soldiers and civilian efforts, more than Truman's executive order, for achieving integration in the context of the Cold War.

Today, the military is one the most racially diverse institutions in the United States. But for many decades African American soldiers battled racial discrimination and segregation within its ranks. In the years after World War II, the integration of the armed forces was a touchstone in the homefront struggle for equality-though its importance is often overlooked in contemporary histories of the civil rights movement. Drawing on a wide array of sources, from press reports and newspapers to organizational and presidential archives, historian Christine Knauer recounts the conflicts surrounding black military service and the fight for integration.

Let Us Fight as Free Men shows that, even after their service to the nation in World War II, it took the persistent efforts of black soldiers, as well as civilian activists and government policy changes, to integrate the military. In response to unjust treatment during and immediately after the war, African Americans pushed for integration on the strength of their service despite the oppressive limitations they faced on the front and at home. Pressured by civil rights activists such as A. Philip Randolph, President Harry S. Truman passed an executive order that called for equal treatment in the military. Even so, integration took place haltingly and was realized only after the political and strategic realities of the Korean War forced the Army to allow black soldiers to fight alongside their white comrades. While the war pushed the civil rights struggle beyond national boundaries, it also revealed the persistence of racial discrimination and exposed the limits of interracial solidarity.

Let Us Fight as Free Men reveals the heated debates about the meaning of military service, manhood, and civil rights strategies within the African American community and the United States as a whole.

"Could the Supreme Court have ordered public school integration in 1954 if the military had remained segregated? In Let Us Fight As Free Men, Christine Knauer demonstrates that the battle to desegregate the U.S. armed services was key to the more extensive racial integration of American life that followed. By giving a history to events usually told episodically, Knauer demonstrates important connections between the 1940s and 1950s, and between civil rights in the military and in civilian life. This book fills temporal and theoretical gaps vital to the African American freedom struggle."-Glenda Gilmore, Yale University

"A valuable contribution to histories of the black freedom struggle. Christine Knauer draws on prodigious research and thorough analysis to bring to life the story of African Americans in the military following World War II."-Adriane Lentz-Smith, Duke University

Christine Knauer is a postdoctoral research fellow at the Eberhard Karls University Tubingen, Germany.
GOR011247221
9780812245974
0812245970
Let Us Fight as Free Men: Black Soldiers and Civil Rights by Christine Knauer
Christine Knauer
Politics and Culture in Modern America
Used - Very Good
Hardback
University of Pennsylvania Press
2014-04-22
352
N/A
Book picture is for illustrative purposes only, actual binding, cover or edition may vary.
This is a used book - there is no escaping the fact it has been read by someone else and it will show signs of wear and previous use. Overall we expect it to be in very good condition, but if you are not entirely satisfied please get in touch with us
Trustpilot