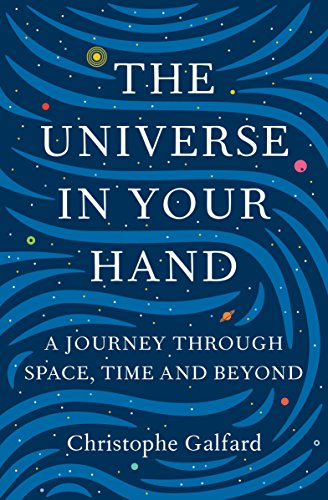 The Universe in Your Hand
by Christophe Galfard

Used Price
$23.49
inc. GST
Free Shipping in Australia
An instant popular science classic that explains the mysteries of physics for readers of all ages
Very Good

The Universe in Your Hand Summary

The Universe in Your Hand: A Journey Through Space, Time and Beyond by Christophe Galfard

Imagine if The Hitchhiker's Guide to the Galaxy were a real, practical book about the mysteries of the universe . . .

The Universe in Your Hand takes us on a wonder-filled journey to the surface of our dying Sun, shrinks us to the size of an atom and puts us in the deathly grip of distant Black Holes. Along the way you might come to understand, really understand, the mind-bending science that underpins modern life, from Quantum Mechanics to Einstein's theory of General Relativity.

Through brilliant storytelling and humour rather than graphs and equations, internationally renowned astrophysicist Christophe Galfard has written an instant classic that brings the astonishing beauty of the universe to life - and takes us deep into questions about the beginning of time and the future of humanity.

The Universe in Your Hand Reviews

Mr. Galfard's jaunty, you-are-there narrative invites us to hitch a ride on a light beam, zoom through an atom and plant our disembodied consciousness within the hellfire of the Big Bang. A onetime Ph.D. student of Stephen Hawking's, he is a loquacious tour guide with an arch sense of humor, as in his proposition that the extinction of the dinosaurs stemmed from their ignorance of theoretical physics . . . In turn come chapters on quantum mechanics, the origin of space and time, quantum gravity, black holes, parallel universes, dark matter and dark energy, cosmic inflation, and string theory-in short, an epic feast of modern physics. As portioned out by Mr. Galfard, the information goes down easily. * Wall Street Journal *

Galfard dispenses with mathematical formulas in this foray into modern physics, making a lively imagination the only portal necessary for general readers hungry for the intellectual excitement of astral and atomic exploration. In a series of mind-stretching thought experiments readers plunge into the hydrogen atom in a water molecule, there to contemplate the quantum fields that sustain all matter, then shoot out beyond supernovas to ponder the strangely opaque boundary of space-time . . . these probes into the universe will thrill readers but rarely perplex them . . . Galfard leaves exhilarated readers eager to share in the forthcoming discoveries.

Entertaining and comprehensive . . . The deft and dazzling imagery makes difficult concepts accessible, streamlining the progression through topics and fulfilling Galfard's promise to 'not leave any readers behind'. . . Readers looking to expand their knowledge of physics and cosmology will find everything they need here.

How can we ever hope to fully grasp the infinite complexities of space and time, or even the very nature of reality itself? Thankfully, Christophe Galfard shows us the way, through a well-written and thoroughly approachable journey through what we know of modern astronomy and physics. Part personal conversation, part travelogue, and part science primer for the non-scientist, The Universe in Your Hand is a delightful and highly educational read.

-- Jim Bell, author of The Interstellar Age and Postcards from Mars

If Ms. Frizzle were a physics student of Stephen Hawking, she might have written The Universe In Your Hand, a wild tour through the reaches of time and space, from the interior of a proton to the Big Bang to the rough suburbs of a black hole. It's friendly, excitable, erudite, and cosmic.

-- Jordan Ellenberg, New York Times bestselling author of How Not To Be Wrong

A useful book for readers to visualize the complex ideas of modern physics.

Christophe Galfard holds a Ph.D. in theoretical physics from Cambridge University, where he was Professor Stephen Hawking's graduate student from 2000 to 2006, researching the so-called black hole information paradox and he co-authored George's Secret Key to the Universe with Stephen Hawking and his daughter Lucy Hawking. His book, The Universe in Your Hand, has been translated into over twenty different languages.

GOR007006892
The Universe in Your Hand: A Journey Through Space, Time and Beyond by Christophe Galfard
Christophe Galfard
Used - Very Good
Hardback
Pan Macmillan
2015-08-27
300
1447284089
9781447284086
N/A
Book picture is for illustrative purposes only, actual binding, cover or edition may vary.
This is a used book - there is no escaping the fact it has been read by someone else and it will show signs of wear and previous use. Overall we expect it to be in very good condition, but if you are not entirely satisfied please get in touch with us.