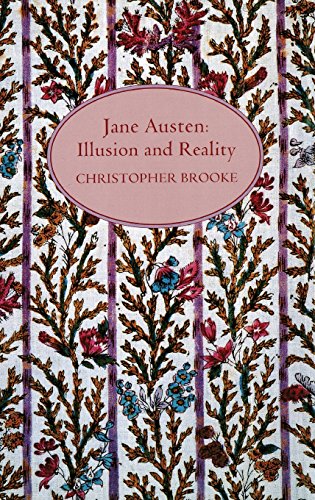 "Can he be a sensible man, sir?"
"No, my dear; I think not..."
Thus Christopher Brooke prefaces his study of Jane Austen, whose sharp intelligence and wit have been the companions of his leisure for many years. In answer to the question as to whether there can be anything left to be said, Brooke returns rewardingly to her own writing, the novels and the letters, and with a historian's precision reveals new detail and fresh insights. What is the world Jane Austen describes, and how is it related to the world in which she lived? A close reading of each of the major novels leads into a detailed examination of a sheaf of themes - church and clergy, rank and status, marriage - to see how they are handled in their social and historical setting, what is revealed about Jane Austen's deepest convictions, and how these might be validly deduced from the text of her novels. The wisdom and insight he has brought to historical research are now rewardingly brought to bear on a novelist of endless fascination.

The late CHRISTOPHER BROOKE enjoyed a wide reputation as a historian, primarily of the medieval church and other institutions (he is the author of The Medieval Idea of Marriage), and of the 18th-century church portrayed so frequently, and so variously, in Jane Austen's novels.

Illusion and reality; a didactic novelist?; materials - the archive, the letters of Jane Austen, the "juvenilia"; chronology -Cassandra's evidence, the evidence of the letters, the use of almanacs, 1800-1810; prelude to the novels; "Northanger Abbey"; "Sense and Sensibility"; "Pride and Prejudice"; "Mansfield Park" -the poor relation, the play within the play, the plot of "Mansfield Park"; "Emma" - the two levels, Mr Woodhouse, Harriet Smith, the denouement; "Persuasion" - the two levels, the persuasion, the story, Lyme, the denouement; church and clergy -the church in the 18th century, church music, music in parish churches, Jane Austen and the Evangelicals, Sunday travelling, Jane Austen's religion, the clergy in the novels; rank and status - Emma's snobbery, equality and hierarchy, equality in "Pride and Prejudice", money - "Northanger Abbey" and "Sense and Sensibility", "Pride and Prejudice" and the equality of gentlemen, "Mansfield Park", "Emma" and women, rank and status in "Persuasion"; marriage in the novels - marriage "in esse", a romantic view of marriage - Marianne Dashwood and Elizabeth Bennet, marriage in principle - Sir Thomas Bertram's view, Lady Bertram's view of marriage, Miss Crawford's views on marriage, Mr and Mrs George Knightley, "Persuasion", the wooing of Fanny Knight; convictions and the moral code; epilogue - reflections on the feminism of Jane Austen.

GOR001952213
Jane Austen: Illusion and Reality by Christopher Brooke
Christopher Brooke
Used - Very Good
Hardback
Boydell & Brewer Ltd
1999-11-04
240
0859915573
9780859915571
N/A
Book picture is for illustrative purposes only, actual binding, cover or edition may vary.
This is a used book - there is no escaping the fact it has been read by someone else and it will show signs of wear and previous use. Overall we expect it to be in very good condition, but if you are not entirely satisfied please get in touch with us.