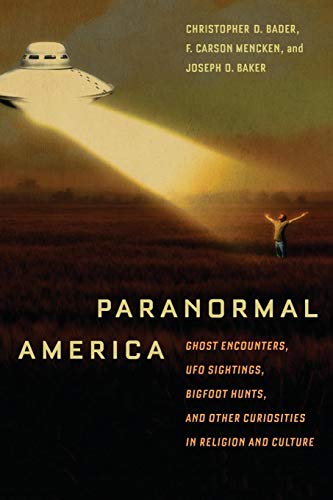 Out of Stock
$27.99
inc. GST
The definitive portrait of Americans who believe in or have experienced such phenomena as ghosts, Bigfoot, UFOs, psychic phenomena, astrology, and the power of mediums
Like New
Only 0 left

A significant number of Americans spend their weekends at UFO conventions hearing whispers of government cover-ups, at New Age gatherings learning the keys to enlightenment, or ambling around historical downtowns learning about resident ghosts in tourist-targeted "ghost walks". They have been fed a steady diet of fictional shows with paranormal themes such as The X-Files, Supernatural, and Medium, shows that may seek to simply entertain, but also serve to disseminate paranormal beliefs. The public hunger for the paranormal seems insatiable.

Paranormal America provides the definitive portrait of Americans who believe in or have experienced such phenomena as ghosts, Bigfoot, UFOs, psychic phenomena, astrology, and the power of mediums. However, unlike many books on the paranormal, this volume does not focus on proving or disproving the paranormal, but rather on understanding the people who believe and how those beliefs shape their lives.

Drawing on the Baylor Religion Survey-a multi-year national random sample of American religious values, practices, and behaviors-as well as extensive fieldwork including joining hunts for Bigfoot and spending the night in a haunted house, authors Christopher Bader, F. Carson Mencken, and Joseph Baker shed light on what the various types of paranormal experiences, beliefs, and activities claimed by Americans are; whether holding an unconventional belief, such as believing in Bigfoot, means that one is unconventional in other attitudes and behaviors; who has such experiences and beliefs and how they differ from other Americans; and if we can expect major religions to emerge from the paranormal.

Brimming with engaging personal stories and provocative findings, Paranormal America is an entertaining yet authoritative look at a growing segment of American religious culture.

"Paranormal America provides an in-depth analysis of beliefs and experiences that lie outside the realm of maintream religion and science, or at least those that exist at their furthest edges, and it will serve as a seminal wok for future research on the paranormal."-Paul J. Olson,Sociology of Religion
"Entertaining sightseeing in a world that is often trivialized by academics." -Journal of American History
"Paranormal Activity is the ultimate anthology of the educational, religious, sexual, and monetary factors that influence people's perceptions and interests in the parinormal . . . The book deconstructs what would normally be dry and stuffy scientific data into cleverly engaging sections."-Kyle B. Morton,Fate Magazine
"Paranormal America presents an array of fascinating data derived from a large-scale survey on areas of human experience that are sorely in need of scholarly attention." -Journal of Religion and Popular Culture
"Sociologists all, Bader and Mencken and Baker have written a solid book on an esoteric topic . . . this is the most authoritative profile this reviewer has encountered on Americans who believe in or who have experienced 'paranormal phenomena'." -S. Krippner, Saybrook University,Choice Magazine
"(The Authors) have used the data from the Baylor Religion Survey, and relevant field work, to provide a demographic profile of paranormal beliefs in the United States . . . The strength of Paranormal Actvivity lies in it's ability to avoid joining the debate on either extreme. Reporting the field work in a straightforward manner, the book allows for the statistics to stay in the forground."-wordpress.com

"The authors convincingly show that believing in flying saucers or some other paranormal subject-Bigfoot, ghosts, astrology, psychics-is not fringe at all. More than two-thirds of Americans accept the reality of at least one such phenomenon."

"Paranormal America is an authoritative but extremely readable analysis of an important but often ignored subculture. This fine book explains how many people seek personally-relevant meaning in a chaotic and often alienating world. In these pages we learn much not only about believers in ESP, Bigfoot, and astrology, but also about the general ways in which all human minds make sense of our perplexing position in the universe."
-William Bainbridge,author of Across the Secular Abyss: From Faith to Wisdom

"The book provides solid evidence on a number of topics about paranormal belief and practice that have been much debated by social scientists." -Andrew McKinnon,Journal for the Scientific Study of Religion

"What makes Paranormal America a fun read is that one would assume scientists would poke more fun at people who study paranormal activity. Instead, they blend skepticism with data and great details that leave readers with a sense of balance."

"It is accessible to any reader with an interest in the convergence of paranormal beliefs and religion. The thought-provoking narrative will not disappoint experts on the topic. Highly recommended"

-Library Journal
"This is an interesting study which is likely to be referred to by sociologists for some considerable time to come, and no doubt put to various, sometimes mutually contradictory, uses."-The Magonia Review of Books

Christopher Bader is Professor of Sociology at Chapman University and affiliated with the Institute for Religion, Economics and Culture (IRES). He is Associate Director of the Association of Religion Data Archives (www.theARDA.com) and principal investigator on the Chapman University Survey of American Fears, as well as coauthor of Paranormal America: Ghost Encounters, UFO Sightings, Bigfoot Hunts, and Other Curiosities in Religion and Culture, second edition (also available from NYU Press). F. Carson Mencken is Professor and department chair of Sociology at Baylor University. Joseph O. Baker is Associate Professor in the Department of Sociology and Anthropology at East Tennessee State University and a senior research associate for the Association of Religion Data Archives.

Acknowledgments 1 Th e House of 150 Ghosts 2 Th e Truth Is Within 3 Th e Truth Is Out There: Paranormal Beliefs and Experiences 4 Round Trip to Hell in a Flying Saucer? 5 Paranormal Subcultures 6 Paranormal People 7 Darkness and Light 8 Out on a Limb Appendix Notes References Index About the Authors

GOR010425735
Paranormal America (second edition): Ghost Encounters, UFO Sightings, Bigfoot Hunts, and Other Curiosities in Religion and Culture by Christopher D. Bader
Christopher D. Bader
Used - Like New
Paperback
New York University Press
2011-01-05
272
0814791352
9780814791356
N/A
Book picture is for illustrative purposes only, actual binding, cover or edition may vary.
The book has been read, but looks new. The book cover has no visible wear, and the dust jacket is included if applicable. No missing or damaged pages, no tears, possible very minimal creasing, no underlining or highlighting of text, and no writing in the margins.