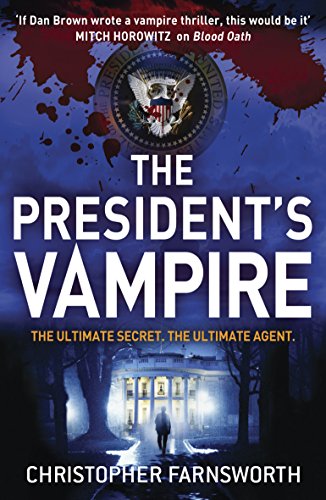 The President's Vampire
by Christopher Farnsworth

In Stock
$23.49
inc. GST
'If Dan Brown wrote a vampire thriller, this would be it.' Mitch Horowitz on BLOOD OATH
Very Good
Only 3 left

Nathaniel Cade is the President's vampire - sworn by a blood oath to protect the President and America from their supernatural enemies. Helped by his partner, political liaison officer Zach Barrows, Cade is looking for the source of a deadly new virus that is being used to attack armies across the world - a virus that transforms its victims into vicious animals in seconds and spreads in minutes. And that a powerful group called the Shadow Company are determined to release among the general public...

Born and raised in Idaho, Christopher Farnsworth worked as an investigative and business reporter before selling his first screenplay. Since then, he has been coming up with new and better ways to kill monsters, bad guys and aliens. He lives in Los Angeles with his wife, Jean Roosevelt Farnsworth, and their daughter, Caroline.

GOR003044322
The President's Vampire: The President's Vampire 2 by Christopher Farnsworth
Christopher Farnsworth
Used - Very Good
Paperback
Hodder & Stoughton General Division
2011-04-26
352
0340998172
9780340998175
N/A
Book picture is for illustrative purposes only, actual binding, cover or edition may vary.
This is a used book - there is no escaping the fact it has been read by someone else and it will show signs of wear and previous use. Overall we expect it to be in very good condition, but if you are not entirely satisfied please get in touch with us.