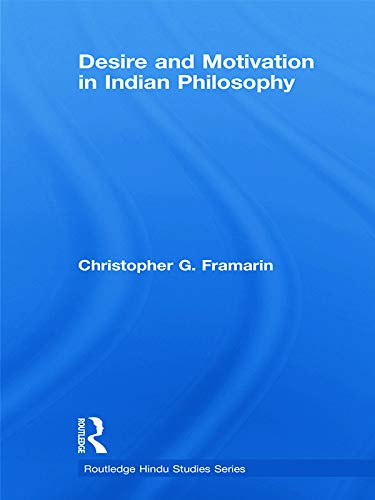 This book is the first in-depth analysis of the doctrine of desireless action in Indian philosophy. It serves as a reference to both contemporary and classical literature on the topic, and will be of interest to scholars of Indian philosophy, religion, the Bhagavadgita and Hinduism.

Christopher G. Framarin is Assistant Professor in the Departments of Philosophy and Religious Studies at the University of Calgary, Canada. His areas of research are Indian philosophy, philosophy of religion, and ethics.

NLS9780415627573
9780415627573
0415627575
Desire and Motivation in Indian Philosophy by Christopher G. Framarin (University of Calgary, Canada)
Christopher G. Framarin (University of Calgary, Canada)
New
Paperback
Taylor & Francis Ltd
2012-08-07
216
N/A
Book picture is for illustrative purposes only, actual binding, cover or edition may vary.
This is a new book - be the first to read this copy. With untouched pages and a perfect binding, your brand new copy is ready to be opened for the first time
Trustpilot