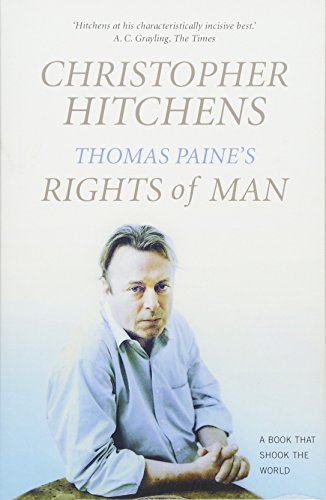 Used Price
$19.49
inc. GST
Free Shipping in Australia
A beautifully written introduction to the making, and message, of a book that was central to the foundation of the United States - the world's most powerful republic: 'Christopher Hitchens... at his characteristically incisive best.' (The Times)
Reviews:
Trustpilot
Very Good

Thomas Paine's Rights of Man: A Biography by Christopher Hitchens

'Christopher Hitchens... at his characteristically incisive best.' --The Times

Thomas Paine is one of the greatest political advocates in history. Declaration of the Rights of Man, first published in 1791, is the key to his reputation. Inspired by his outrage at Edmund Burke's attack on the uprising of the French people, Paine's text is a passionate defence of man's inalienable rights.

In Rights of Man Paine argues against monarchy and outlines the elements of a successful republic, including public education, pensions and relief of the poor and unemployed, all financed by income tax. Since its publication, Rights of Man has been celebrated, criticized, maligned and suppressed but here the polemicist and commentator Christopher Hitchens marvels at its forethought and revels in its contentiousness. Above all, Hitchens demonstrates how Thomas Paine's book forms the philosophical cornerstone of the first democratic republic, whose revolution is the only example that still speaks to us: the United States of America.

"'Christopher Hitchens... at his characteristically incisive best.' A. C. Grayling, The Times * 'Hitchens makes [his case for Thomas Paine's Rights of Man] with characteristic verve and style... engaging and well worth reading.' John Gray, New Statesman * 'A timely book.' Billy Bragg, Books of the Year, Guardian * 'Compendious, clear and engaged accounts... this series is a big success.' A. C. Grayling, The Times"

Christopher Hitchens (1949-2011) was a contributing editor to Vanity Fair and visiting Professor in liberal studies at the New School in New York. He was the author of numerous books, including works on Thomas Jefferson, Thomas Paine, George Orwell, Mother Theresa, Henry Kissinger and Bill and Hillary Clinton, as well as the international bestseller and National Book Award nominee, god Is Not Great.

GOR001282906
Thomas Paine's Rights of Man: A Biography by Christopher Hitchens
Christopher Hitchens
BOOKS THAT SHOOK THE WORLD
Used - Very Good
Paperback
Atlantic Books
2007-08-09
176
1843546280
9781843546283
N/A
Book picture is for illustrative purposes only, actual binding, cover or edition may vary.
This is a used book - there is no escaping the fact it has been read by someone else and it will show signs of wear and previous use. Overall we expect it to be in very good condition, but if you are not entirely satisfied please get in touch with us.