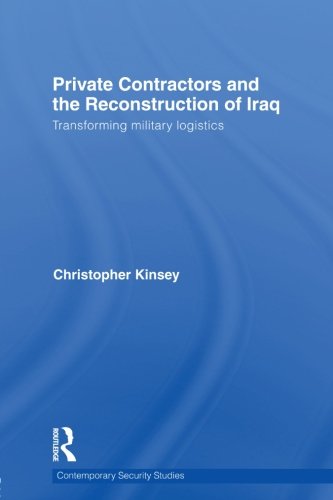 Private Contractors and the Reconstruction of Iraq Summary

Private Contractors and the Reconstruction of Iraq examines the controversial role of military contractors in the reconstruction of Iraq. When 'Operation Iraqi Freedom' was launched in March 2003, few, if any, of the Coalition's political leaders could have envisaged that within a few months the number of private contractors engaged to keep the troops supplied would exceed their actual combat strength. This alternative 'army' was not only to become the largest assemblage of contractors in living memory to accompany a military force into a war zone, but was also responsible for a fundamental transformation of how military logistics were delivered.

This book explains how and why the US and UK governments became so dependent upon military contractors during the war in Iraq. It also examines the ramifications this new dependency will have on future military operations, as the conflict in Iraq has shown that private contractors are now indispensable to the attainment of both the military and political objectives of war. Finally, the book discusses what advantages and disadvantages these companies have brought to the reconstruction of Iraq, and what lessons need to be learned from this experience.

This book will be of great interest to students of military and strategic studies, Middle Eastern politics and international security, and as well as policymakers and military professionals.

Christopher Kinsey is a lecturer in international security at King's College London, Defence Studies Department, at the Joint Services Command and Staff College, Shrivenham. His previous publications include Corporate Soldiers and International Security: The Rise of Private Military Companies (Routledge: 2006)

GOR009694439
Private Contractors and the Reconstruction of Iraq: Transforming Military Logistics by Christopher Kinsey (King's College London, University of London, UK)
Christopher Kinsey (King's College London, University of London, UK)
Contemporary Security Studies
Used - Good
Paperback
Taylor & Francis Ltd
2013-04-10
194
0415850169
9780415850162
N/A
Book picture is for illustrative purposes only, actual binding, cover or edition may vary.
This is a used book - there is no escaping the fact it has been read by someone else and it will show signs of wear and previous use. Overall we expect it to be in very good condition, but if you are not entirely satisfied please get in touch with us.