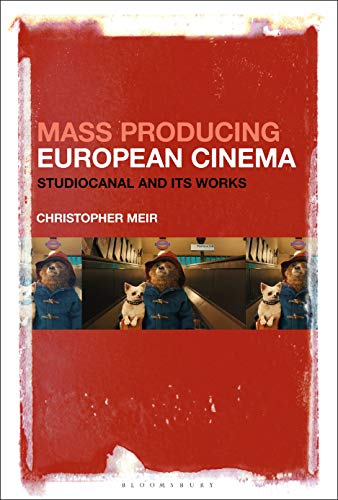 Used Price
$68.99
inc. GST
Free Shipping in Australia
"This book examines the growth and development of StudioCanal as the leading film and television studio in Europe as it seeks to challenge the global dominance of the Hollywood majors"--
Very Good

Equal parts historical study, industrial analysis and critical survey of some of the most important films and television programs in recent European history, this book gives readers an overview of the development and output of this important company while also giving them a ringside seat for the latest round of the oldest battle in the film business. With films like Lucy, The Impossible and Paddington, European studios are producing hits that are unprecedented in terms of global success. Christopher Meir delves into StudioCanal, the foremost European company in the contemporary film and television industries, and chronicles its rise from a small production subsidiary of Canal Plus to being the most important global challenger to Hollywood's dominance.

The recent emergence of several European studios that integrate production and distribution as global players is symptomatic of the profound changes that are taking place in the international screen industries. In this important book, Christopher Meir helps understand these changes by providing a detailed account of Studiocanal, arguably the most interesting and successful of these studios. Showing a command of the historical development of European cinema, industry economics and relevant scholarship, Meir provides a detailed analysis of the company's evolution, business practices its key outputs that will be of significant value to all those interested in the changing nature of the film and television industries. * Andrew Spicer, Professor of Cultural Production, University of the West of England, Bristol, UK *
Christopher Meir's ambitious, expansive, and engaging book charts how Studiocanal's evolution fits within the larger history of European studios, shedding much-needed light on the transformations taking place in the financing, production, and distribution of global film and television from the 1990s through the 2010s. Even more impressively, his case studies of noted properties like Stargate, The Pianist, Happy Valley, and Shaun the Sheep help ground his discussion and illustrate the opportunities and challenges involved in forging a "pan-European" enterprise. * Alisa Perren, Associate Professor of Radio-Television-Film, University of Texas at Austin, USA *
This exceptional book provides timely and comprehensive analysis of Studiocanal as a globally-oriented pan-European studio, focusing on interrelationships between its corporate history and broader industrial contexts on one hand and the films and television programs it has produced on the other. This first-of-its kind in-depth analysis of a contemporary European studio is invaluable in helping us understand what has been happening with European cinema vis-a-vis Hollywood and global market trends. Christopher Meir's focus on the vertically and horizontally integrated Studiocanal and its ambitions in cross-border distribution allows him to avoid the usual pitfalls of studying European cinema in terms of big directors, artistic movements, and national borders. At the same time, he apparently never stopped being an authentic film fan, in each of the chapters presenting intimate knowledge and sympathy for a diverse film output he critically comments. He always draws on meticulous research of a wide variety of trade-press sources and writes with crystal clarity that will help students to use his book in classes. This is an exemplary scholarly work proving the key importance of media industry studies, as a discipline cultivated mostly by American scholars, for understanding the changes European film and television is going through. * Petr Szczepanik, Associate Professor of Film Studies, Charles University, Czech Republic *
With Mass producing European cinema, Meir succeeds in demonstrating convincingly that European cinema is industrial, too, and maybe more importantly, that its films are capable of becoming global hits, which might set some readers' minds at rest: Europeans can (still) influence film culture globally. * Communications *

About Christopher Meir (University of the West Indies, St. Augustine, Trinidad and Tobago)

Christopher Meir is a UC3M CONEX Fellow in the Department of Journalism and Audiovisual Communication at the University of Carlos III Madrid, Spain. He is the author of Scottish Cinema: Texts and Contexts (2014) and co-editor of Beyond the Bottom Line: The Producer in Film and Television Studies (2014). He has also published numerous articles and book chapters on industrial issues in Film and Television Studies.