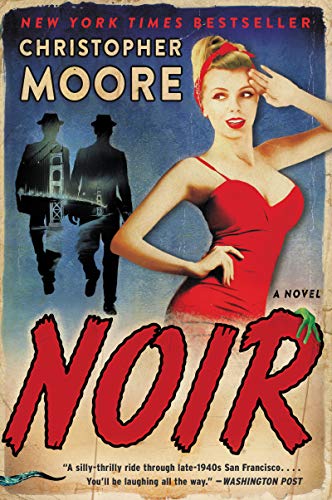 It's not every afternoon that an enigmatic, comely blonde named Stilton (like the cheese) walks into the scruffy gin joint where Sammy Two Toes Tiffin tends bar. It's love at first sight, but before Sammy can make his move, an Air Force general named Remy arrives with some urgent business.

Noir: A Novel by Christopher Moore

The absurdly outrageous, sarcastically satiric, and always entertaining New York Times bestselling author Christopher Moore returns in finest madcap form with this zany noir set on the mean streets of post-World War II San Francisco, and featuring a diverse cast of characters, including a hapless bartender; his Chinese sidekick; a doll with sharp angles and dangerous curves; a tight-lipped Air Force general; a wisecracking waif; Petey, a black mamba; and many more.

It's not every afternoon that an enigmatic, comely blonde named Stilton (like the cheese) walks into the scruffy gin joint where Sammy Two Toes Tiffin tends bar. It's love at first sight, but before Sammy can make his move, an Air Force general named Remy arrives with some urgent business. 'Cause when you need something done, Sammy is the guy to go to; he's got the connections on the street.

Meanwhile, a suspicious flying object has been spotted up the Pacific coast in Washington State near Mount Rainier, followed by a mysterious plane crash in a distant patch of desert in New Mexico that goes by the name Roswell. But the real weirdness is happening on the streets of the City by the Bay.

When one of Sammy's schemes goes south and the Cheese mysteriously vanishes, Sammy is forced to contend with his own dark secrets-and more than a few strange goings on-if he wants to find his girl.

Raymond Chandler meets the SyFy Channel... Fans of noir film and fiction will find a lot to enjoy in this loving genre tribute, and those already familiar with Moore's books will simply be in love. -- Library Journal (starred review)
There is a laugh-out-loud moment every couple of pages. And possibly a space alien, because, hey, this is a Christopher Moore book, after all. -- BookPage
The master of satire is back . . . Noir is a fun parody of detective fiction that has everything Christopher Moore fans have come to love and expect from his work: humor, fantasy, absurdity, and a cast of outrageous characters you won't soon forget. -- Bustle
Witty, satirical, and hilarious with a delicious quiver of crime noir hovering over all. -- New York Journal of Books
[A] pedal-to-the-metal, exquisitely written comic romp through a neon-lit San Francisco that may never have actually existed, but that, in Moore's supremely talented hands, sure feels like it could have. -- Booklist (starred review)
[Moore's] latest novel Noir only shows a strengthened propensity for snappy dialogue, perverse scenarios, sharp satire, and oddball characters... delivered alongside steady helpings of the pun-laden prose, sick sight gags, and wicked, occasionally raunchy humor that readers have come to expect from one of America's funniest living writers. -- barnesandnoble.com
Christopher Moore gives us dizzy dames and shadowy gangsters in Noir. Sammy, Moore's comic revision of Sam Spade, will take you on a silly-thrilly ride through late-1940s San Francisco, and you'll be laughing all the way. -- Washington Post
Noir turns a legendary genre on its side and offers grand entertainment at every level. -- Los Angeles Review of Books
Moore is a master of metaphor and a sultan of simile. . . .It takes an author of remarkable talents to keep a profitably urinating snake, a dame named for a dairy product, and a slimy extraterrestrial all running through a narrative. -- Washington Independent Review of Books
Moore spoofs hard-boiled detective fiction in this irreverent send-up set in 1947 San Francisco. . . . [A]n amusing spin on the noir subgenre. -- Publishers Weekly
Laugh out loud funny... it is always great fun to read an exceptional humorist at work. -- Fredericksburg Free Lance-Star
We get plenty of Moore's trademark linguistic hijinks, oddball characters, and a cartwheeling plot in danger of spinning out of control before miraculously sticking the landing. -- San Antonio Express-News
Christopher Moore is the author of the novels Secondhand Souls, Sacre Bleu, A Dirty Job, and Lamb. He lives in San Francisco, California.
GOR009859857
9780062433992
0062433997
Noir: A Novel by Christopher Moore
Christopher Moore
Used - Very Good
Paperback
HarperCollins Publishers Inc
20190516
352
null null null null null null null null null null
Book picture is for illustrative purposes only, actual binding, cover or edition may vary.
This is a used book - there is no escaping the fact it has been read by someone else and it will show signs of wear and previous use. Overall we expect it to be in very good condition, but if you are not entirely satisfied please get in touch with us
Trustpilot