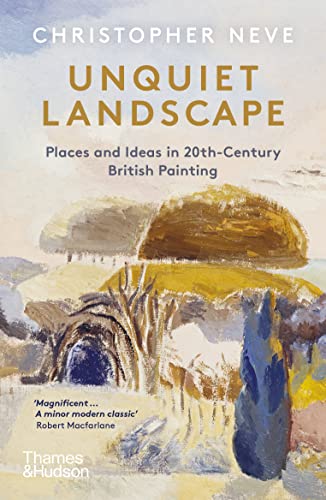 'A minor modern classic, to my mind, uniting art history and landscape thought by means of dazzling, dancing, unsettling sentences ... I'm delighted it's back in print in a new edition' Robert Macfarlane

Christopher Neve's classic book is a journey into the imagination through the English landscape. How is it that artists, by thinking in paint, have come to regard the landscape as representing states of mind? 'Painting', says Neve, 'is a process of finding out, and landscape can be its thesis.' What he is writing is not precisely art history: it is about pictures, about landscape and about thought. Over the years, he was able to have discussions with many of the thirty or so artists he focuses on, the inspiration for the book having come from his talks with Ben Nicholson; and he has immersed himself in their work, their countryside, their ideas. Because he is a painter himself, and an expert on 20th-century art, Neve is well equipped for such a journey. Few writers have conveyed more vividly the mixture of motives, emotions, unconscious forces and contradictions which culminate in the creative act of painting.

Each of the thirteen chapters has a theme and explores its significance for one or more of the artists. The problem of time, for instance, is considered in relation to Paul Nash, God in relation to David Jones, music to Ivon Hitchens, hysteria to Edward Burra, abstraction to Ben Nicholson, 'the spirit in the mass' to David Bomberg. There are also chapters about painters' ideas on specific types of country: about Eric Ravilious and the chalk landscape, Joan Eardley and the sea, and Cedric Morris and the garden.
'Original and engaging ... [a] modern classic' - Country Life (Book of the Week)
'Fierce, witty, wise, elegiac, supremely indifferent to fashion and confident in the long view, this is among the best books written about landscape' - Financial Times
Christopher Neve is a painter and one of the leading experts on British art of the 20th century, and has written several books and numerous articles. For many years he was art critic on the staff of Country Life.
1. The Problem of Time * 2. White: The Chalk Landscape * 3. Black * 4. The Need for Roots * 5. The Idea of the Garden * 6. The Grid and the Town * 7. Seeing Becomes Feeling * 8. The Sea * 9. Inlets and Estuaries * 10. God * 11. Psychology * 12. Abstraction * 13. Appetite
GOR011001481
9780500295472
0500295476
Unquiet Landscape: Places and Ideas in 20th-Century British Painting by Christopher Neve
Christopher Neve
Used - Like New
Paperback
Thames & Hudson Ltd
2020-02-27
248
N/A
Book picture is for illustrative purposes only, actual binding, cover or edition may vary.
The book has been read, but looks new. The book cover has no visible wear, and the dust jacket is included if applicable. No missing or damaged pages, no tears, possible very minimal creasing, no underlining or highlighting of text, and no writing in the margins
Trustpilot