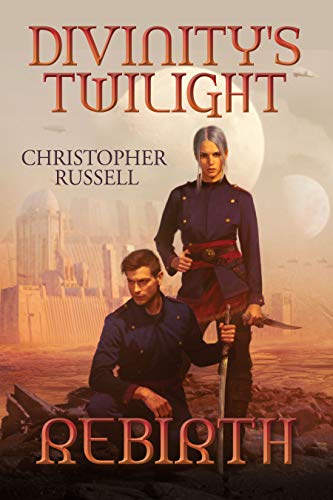 A world consumed by war . . .
An ancient evil resurrected . . .
A millennia old bargain comes due . . .When two blades clash, the third will fall, and the fate of all will be jeopardized. To save Lozaria, the failures of the past must be atoned for by a new generation of heroes. The time has come for mortals to cast off sight and, in doing so, truly come to see . . .Victory is never absolute

Seven centuries ago, the forces of order won the Illyriite War on the plains of Har'muth. Darmatus and Rabban Aurelian slew their elder brother, Sarcon, the despotic architect of the conflict, then sacrificed themselves to banish the cataclysmic vortex opened with his dying breath. The first advent of the Oblivion Well was thwarted. Even without their vanished gods, the seven races of Lozaria proved themselves capable of safeguarding their world.

Or so the story goes.

The year is now 697 A.B.H. (After the Battle of Har'muth). Though war itself remains much the same, the weapons with which it is waged have evolved. Airships bearing powerful cannons ply the skies, reducing the influence of mages and their spells. Long range communication has brought far flung regions of Lozaria closer than ever before. At the center of this technological revolution are the three Terran states of Darmatia, Rabban, and Sarconia, who have fought a near ceaseless campaign of 700 years in an attempt to best each other. The roots of their enmity lie buried beneath the wasteland of Har'muth, a place all three nations consider best forgotten.

However, an ancient power sealed within Har'muth has not forgotten them, and the descendants of those who fought on that field must now take a stand to rectify the mistakes of the past.

Christopher Russell presents the first book in his gripping fantasy series: Divinity's Twilight.
Divinity's Twilight: Rebirth is a true epic in that its complex world and its influences will leave readers intrigued and engaged in mysteries and miracles that leave the door open for further adventures.
Midwest Book Review

Fans of epic fantasy who look for world-building tales will find Divinity's Twilight: Rebirth a compelling read that begins midway in an already-extensive history, but carries its story with a powerful surge of description, action, and intrigue.
-Midwest Book Review

Christopher Russell is a mechanical and aerospace engineer graduate of the University of Virginia who has loved reading since the day he picked up a book and writing since he could scrawl his first letters. After voraciously consuming titles from every genre - stretching from Star Wars to Lord of the Rings - he decided to combine the expertise from his professional education, passions, and Christian faith into a fantasy epic bridging the gap between magic and science. He currently resides in Charlottesville, VA, with his staunchly loyal dog, Vallen, named after the protagonist of his first work.
GOR010893976
9781642798876
1642798878
Divinity's Twilight: Rebirth by Christopher Russell
Christopher Russell
Used - Very Good
Paperback
Morgan James Publishing llc
2020-09-18
498
N/A
Book picture is for illustrative purposes only, actual binding, cover or edition may vary.
This is a used book - there is no escaping the fact it has been read by someone else and it will show signs of wear and previous use. Overall we expect it to be in very good condition, but if you are not entirely satisfied please get in touch with us
Trustpilot