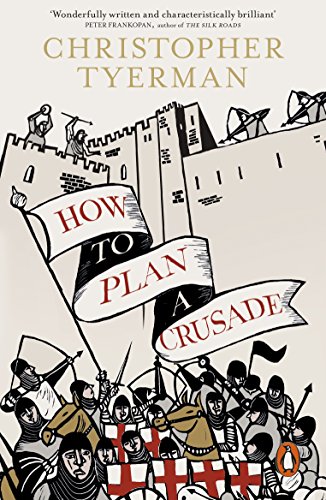 How to Plan a Crusade
by Christopher Tyerman

How to Plan a Crusade Summary

How to Plan a Crusade: Reason and Religious War in the High Middle Ages by Christopher Tyerman

'Elegant, readable ... an impressive synthesis ... Not many historians could have done it' - Jonathan Sumption, Spectator

'Tyerman's book is fascinating not just for what it has to tell us about the Crusades, but for the mirror it holds up to today's religious extremism' - Tom Holland, Spectator

Thousands left their homelands in the Middle Ages to fight wars abroad. But how did the Crusades actually happen? From recruitment propaganda to raising money, ships to siege engines, medicine to the power of prayer, this vivid, surprising history shows holy war - and medieval society - in a new light.

How to Plan a Crusade Reviews

An impressive synthesis of a complicated subject, presented in elegant, readable prose. Not many historians could have done it -- Jonathan Sumption * The Spectator *
His deeply researched study is dedicated to exploring the relationship between human reason and religious war in all its aspects - justification, propaganda, recruitment, finance, logistics - to show us how 'reason made religious war possible.' -- Diarmaid MacCulloch * London Review of Books *
Mining details on victualing and logistics 800 years ago is Tyerman's forte, and he throws them on to the page like chaff from a trebuchet... it is comprehensive, laying down a great skein of fact where there was only supposition (much of it false). And, as the West gears up for the crusade of 2015-16 against Islamic State, it is horribly timely. -- Giles Whittell * The Times *
Tyerman's book is fascinating not just for what it has to tell us about the Crusades, but for the mirror it holds up to today's religious extremism -- Tom Holland * Mail on Sunday *
How to Plan a Crusade is serious and scholarly, the synthesis of decades of work on difficult, fragmented sources. Administrative records weren't routinely kept until around 1300, which makes Tyerman's task harder and more impressive...this is also a lively book, laced with wry asides and enough surprising details to pique the general reader. -- Jessie Childs * The Guardian *
There is a deeper story here about the rise in Britain of both class structure and bureaucracy... -- Sinclair McKay * Telegraph *
Wonderfully written and characteristically brilliant account of the logistics (and motivations) that underpinned the Crusades -- Peter Frankopan

Christopher Tyerman is a Fellow and Tutor in History at Hertford College, Oxford and Lecturer in Medieval History at New College, Oxford. He has written extensively on the crusades, most recently God's War: A New History of the Crusades and The Debate on the Crusades. He is also the editor of the Penguin Classics edition of the Chronicles of the First Crusade.

GOR008004977
How to Plan a Crusade: Reason and Religious War in the High Middle Ages by Christopher Tyerman
Christopher Tyerman
Used - Very Good
Paperback
Penguin Books Ltd
2016-09-29
432
0241954657
9780241954652
N/A
Book picture is for illustrative purposes only, actual binding, cover or edition may vary.
This is a used book - there is no escaping the fact it has been read by someone else and it will show signs of wear and previous use. Overall we expect it to be in very good condition, but if you are not entirely satisfied please get in touch with us.