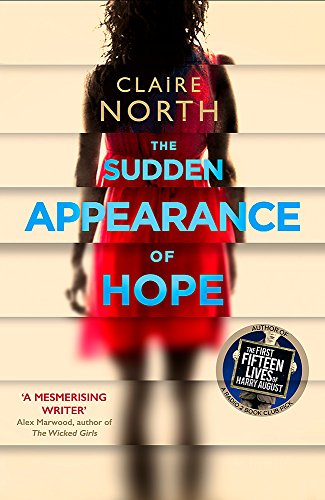 The Sudden Appearance of Hope
by Claire North

The Sudden Appearance of Hope Summary

The Sudden Appearance of Hope: WINNER OF THE WORLD FANTASY AWARD 2017 by Claire North

My name is Hope Arden. I am the girl the world forgets.

It started when I was sixteen years old.

A father forgetting to drive me to school. A mother setting the table for three, not four. A friend who looks at me and sees a stranger.

No matter what I do, the words I say, the crimes I commit - you will never remember who I am.

That makes my life tricky. It also makes me dangerous . . .

The Sudden Appearance of Hope is the tale of a girl no one remembers, yet her story will stay with you for ever.

'Just extraordinary' Claire Mackintosh, author of I Let You Go

'Little short of a masterpiece' Independent

'One of the fiction highlights of the decade' Judy Finnigan, Richard and Judy Book Club

The Sudden Appearance of Hope Reviews

Claire North is a pseudonym for Catherine Webb, a Carnegie Medal-nominated author whose debut novel was written when she was just fourteen years old. She is fast establishing herself as one of the most powerful and imaginative voices in modern fiction. Her first book published under the Claire North pen name was The First Fifteen Lives of Harry August, which became a word-of-mouth bestseller and was shortlisted for the Arthur C. Clarke Award. The follow-up Touch received widespread critical acclaim and was described by the Independent as 'little short of a masterpiece'. Her next novel The Sudden Appearance of Hope won the 2017 World Fantasy Award for Best Novel, and her recent book The End of the Day has been shortlisted for the 2017 Sunday Times/PFD Young Writer of the Year Award. In addition to working on her next novel 84K, Claire is also one of three writers contributing to the upcoming Black Mirror book, which ties into Charlie Brooker's award-winning TV series. In between writing, Claire also works as a theatre lighting designer. She lives in London.

GOR010390786
The Sudden Appearance of Hope: WINNER OF THE WORLD FANTASY AWARD 2017 by Claire North
Claire North
Used - Like New
Paperback
Little, Brown Book Group
2016-05-19
480
0356504530
9780356504537
Winner of World Fantasy Award 2017 (UK)
Book picture is for illustrative purposes only, actual binding, cover or edition may vary.
The book has been read, but looks new. The book cover has no visible wear, and the dust jacket is included if applicable. No missing or damaged pages, no tears, possible very minimal creasing, no underlining or highlighting of text, and no writing in the margins.