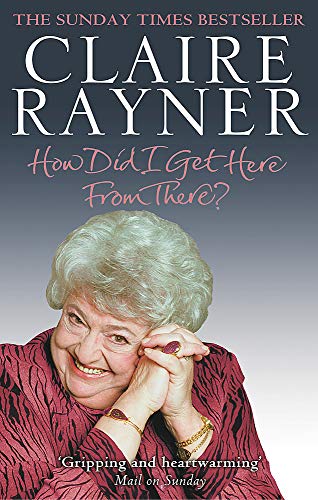 How Did I Get Here From There?
by Claire Rayner

Used Price
$15.49
inc. GST
Free Shipping in Australia
* The long-awaited autobiography from Claire Rayner, Britain's favourite matriarch, who according to The Times, 'soothes the hurt and harries the hurtful with equal vigour'.
Reviews:
Trustpilot
Very Good

How Did I Get Here From There? Summary

How Did I Get Here From There? by Claire Rayner

It is no secret that happiness was spread a bit thinly in Claire Rayner's far from easy childhood. She was born in Stepney, East London, in the early thirties during the Depression and was evacuated during the war. She chose nursing as a career, lying about her age in order to enrol as a cadet in the Epsom Cottage Hospital in Surrey, after which she studied at the Royal Northern, winning their gold medal for achievement. Thus began a lifetime's passion for proper medical care for all, a passion that has made her one of Britain's most important and successful campaigners. She is a patron of more than sixty social and charitable organisations.

But it is as advice columnist extraordinaire that she is most famous. A career that began in 1963 on Hers magazine was followed by columns in The Sun and later the Sunday Mirror. At one point she was receiving 1000 letters a week. Working from home, with six secretaries, she read ever single letter that came to her.

Customer Reviews - How Did I Get Here From There?

How Did I Get Here From There? Reviews

She certainly writes a cracking tale for her descendants. Her rags-to-riches history is as gripping and warming as such tales always are. * '...a refreshing, energetic, and honest book which, above all, makes us feel we have met the writer and found her to be lively, interesting and opinionated.' *
IRELAND ON SUNDAY * 'More than just another rags-to-riches tale, this gives a real and compelling insight not only into her life and how it shaped Britain's favourite mother figure, but also into a past which will seem completely alien to many.' *
BLACKPOOL GAZETTE * '...moving and compelling.' *
CARLISLE NEWS AND STAR * 'a remarkable story, skilfully told.' *

Claire Rayner, OBE, writer, broadcaster and social campaigner was married for fifty years to actor and artist Desmond Rayner. She died in October 2010.

GOR000944017
How Did I Get Here From There? by Claire Rayner
Claire Rayner
Used - Very Good
Paperback
Little, Brown Book Group
2003-12-04
448
1844080501
9781844080502
N/A
Book picture is for illustrative purposes only, actual binding, cover or edition may vary.
This is a used book - there is no escaping the fact it has been read by someone else and it will show signs of wear and previous use. Overall we expect it to be in very good condition, but if you are not entirely satisfied please get in touch with us.