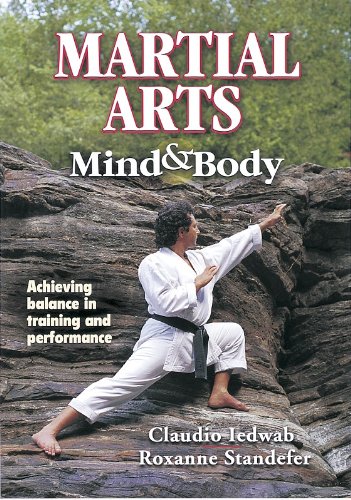 Martial Arts Mind and Body
by Claudio A. Iedwab

Used Price
22,49 $
inc. GST
Free Shipping in Australia
Centred on the Japanese concept of kiai, this book explains how to sharpen concentration and awareness, improve the ability to learn new skills, perform better in training and competition and remain focused under stress.
Reviews:
Trustpilot
Very Good

Martial Arts Mind and Body by Claudio A. Iedwab

Martial artists have long been admired for their discipline and feats of mental and physical strength as well as the ability to shut out distraction and focus precisely on the task at hand. The authors here reveal how to master these qualities for martial arts and sports performance. Centred on the Japanese concept of kiai, the book explains how to sharpen concentration and awareness, improve the ability to learn new skills, perform better in training and competition and remain focused under stress.


A native of Argentina, Claudio A. Iedwab, sixth-dan, also holds a fifth-dan black belt in taekwondo and jujitsu, and third-dan in karate. He is a former Argentinean national taekwondo champion, South American taekwondo champion, and Chinese national martial art champion. Iedwab has served as a certified instructor at the Federation Francaise de Boxe Francaise Savate et Disciplines Associees and as head instructor at both the United States Taekwon-do Association and the Richard Chun Taekwon-do Center in Argentina. In 1990, he founded the Gorindo School of Martial Art, integrating principles and techniques of taekwondo, karate, savate, jujitsu, and yoga with his personal research and study.

Roxanne L. Standefer holds a third-dan black belt in gorindo and is an instructor trainer at the Gorindo School of Martial Art. She has written two manuals on gorindo, as well as numerous educational and promotional materials in boating safety and outdoor education for the U.S. and Canadian Coast Guards, state and provincial governments, and nongovernmental organizations.

Together this husband-and-wife team have written, edited, and published materials ranging from martial arts books, magazines, and newsletters to bilingual cultural magazines. They are in the process of establishing an outdoor education and art center at their 75-acre property in Bancroft, Ontario, on the edge of Algonquin Wilderness Park, where they enjoy running in the woods and swimming in the lake.

GOR002760385
Martial Arts Mind and Body by Claudio A. Iedwab
Claudio A. Iedwab
Used - Very Good
Paperback
Human Kinetics Publishers
2000-05-01
176
0736001255
9780736001250
N/A
Book picture is for illustrative purposes only, actual binding, cover or edition may vary.
This is a used book - there is no escaping the fact it has been read by someone else and it will show signs of wear and previous use. Overall we expect it to be in very good condition, but if you are not entirely satisfied please get in touch with us.