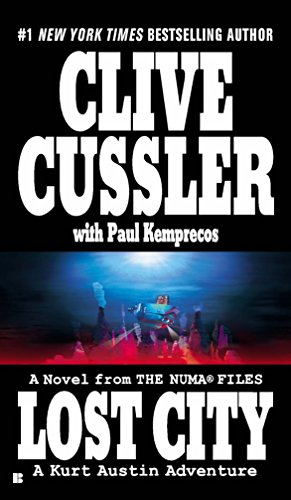 Used Price
$15.49
inc. GST
Free Shipping in Australia
In this latest thriller, rich with the "New York Times" bestselling author's trademark hair-raising action and imagination, an enzyme that will dramatically prolong life has been discovered 2,000 feet beneath the North Atlantic. But why are the people attempting to harvest it getting killed? Original.
Reviews:
Trustpilot
Very Good Well Read

The NUMA crew, under Kurt Austin's direction, take on a blood-thirsty family with a fortune built on crime, in what may be race to discover the very secret of ever-lasting life in this heart-bounding installment in the #1 New York Times-bestselling series.

Kurt Austin is mid-mission when his new colleague, the stunning archeologist Skye Labelle, is called away to examine a mysterious 16th-century military helmet discovered in the possession of a very contemporary-looking corpse. Ms. Labelle's research on the armor draws her into the sights of a ruthless black-widow with her own plans for the artifact. As danger creeps closer to Ms. Labelle, a scientist half-way across the globe is kidnapped. At the same time, experts working to harvest an enzyme discovered two thousand feet down in the North Atlantic, in an area known as "Lost City," start turning up dead. Worlds apart in location and areas of expertise, they all have something in common. And it's up to Kurt Austin, with the help of Joe Zavala and the NUMA Special Assignments Team, to put the pieces together if he's going to keep his friend safe.

Clive Cussler is the author or coauthor of over fifty previous books in five bestselling series, including Dirk Pitt(R), NUMA(R) Files, Oregon(R) Files, Isaac Bell, and Sam and Remi Fargo. His nonfiction works include Built for Adventure The Classic Automobiles of Clive Cussler and Dirk Pitt, and Built to Thrill: More Classic Automobiles from Clive Cussler and Dirk Pitt, plus The Sea Hunters and The Sea Hunters II; these describe the true adventures of the real NUMA, which, led by Cussler, searches for lost ships of historic significance. With his crew of volunteers, Cussler has discovered more than sixty ships, including the long-lost Confederate ship Hunley. He lives in Colorado and Arizona.

Paul Kemprecos has coauthored all five previous NUMA Files novels with Cussler and is a Shamus Award-winning author of six underwater detective thrillers.

GOR008685415
Lost City by Clive Cussler
Clive Cussler
NUMA Files
Used - Very Good
Paperback
Penguin Putnam Inc
2005-08-01
515
0425204197
9780425204191
N/A
Book picture is for illustrative purposes only, actual binding, cover or edition may vary.
This is a used book. We do our best to provide good quality books for you to read, but there is no escaping the fact that it has been owned and read by someone else previously. Therefore it will show signs of wear and may be an ex library book.