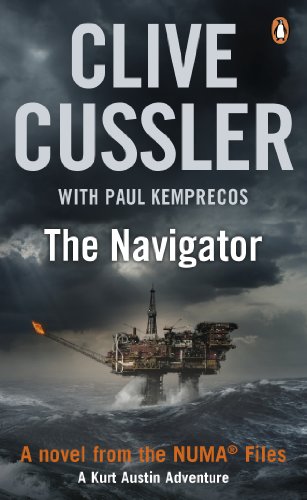 The Navigator
by Clive Cussler

Out of Stock
$14.99
inc. GST
Known as the Navigator, the statue points back to the days of King Solomon and is the vital clue to a secret of unimaginable power. Lucky then that UN investigator Carina Mechadi recovers it quickly.
Very Good
Only 0 left

Clive Cussler continues his thrilling NUMA Files with The Navigator.

Iraq, 2003: in the post-war looting of the treasures from Baghdad's antiquities museum, a legendary Phoenicean statue is stolen . . .

Known as the Navigator, the statue points back to the days of King Solomon and is the vital clue to a secret of unimaginable power. Lucky then that UN investigator Carina Mechadi recovers it quickly. But a daring raid by helicopter in Iceberg Alley off Newfoundland and the statue is gone again - while Carina is only saved by the timely intervention of Kurt Austin of NUMA.

Now Austin and Carina are scouring the globe. Firstly, to track down the statue as it leaves a trail of murder and mayhem in its wake. And, secondly, to beat the thieves to the secret of the Navigator - for if it falls into the wrong hands, the world could be changed for ever.

Clive Cussler, author of the best-selling Dirk Pitt novels Arctic Drift and Trojan Odyssey, and co-author Paul Kemprecos place their hero, Kurt Austin, in a globe-trotting race against time in The Navigator, the seventh novel of the action-packed NUMA Files series. Lost City and Polar Shift are the fifth and sixth.

Bestselling author Clive Cussler has kept readers on the edges of their seats for four decades with his thrilling action novels. As well as the NUMA Files series there are also the Oregon Files, the Dirk Pitt stories (which started it all), the Isaac Bell adventures and the Fargo series. The other titles in the NUMA files series are: Serpent, Blue Gold, Fire Ice, White Death, Lost City, Polar Shift, Medusa, Devil's Gate, and The Storm.

Paul Kemprecos (Author)
Paul Kemprecos has co-authored all of the NUMA (R) Files novels with Clive Cussler and is a Shamus Award-winning author of six underwater detective thrillers. He lives on Cape Cod, Massachusetts.

GOR000936911
The Navigator: NUMA Files #7 by Clive Cussler
Clive Cussler
The NUMA Files
Used - Very Good
Paperback
Penguin Books Ltd
2009-03-01
560
0141028203
9780141028200
N/A
Book picture is for illustrative purposes only, actual binding, cover or edition may vary.
This is a used book - there is no escaping the fact it has been read by someone else and it will show signs of wear and previous use. Overall we expect it to be in very good condition, but if you are not entirely satisfied please get in touch with us.