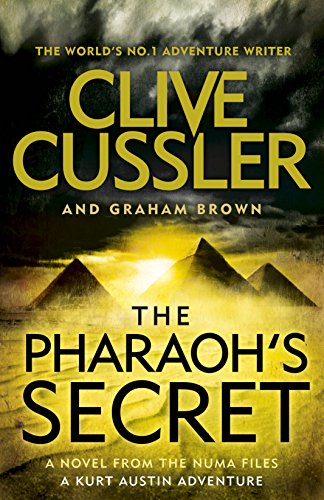 The Pharaoh's Secret by Clive Cussler

Buried deep beneath the Saharan desert is a secret - an ancient elixir so powerful that it is rumoured to take life from the living and restore it to the dead.

LAMPEDUSA, PRESENT DAY
Off a remote island, a mysterious ship releases a deadly poison. Minutes later everyone on the island is dead.

Responding to a distress call, Kurt Austin and the NUMA team struggle to understand what has caused this disaster. As they investigate the incident further they uncover a far greater threat.

WHAT IS THE TRUTH BEHIND THE LEGENDS?

Now Kurt Austin must learn the secrets of the past if he is to save millions from a horrifying death. But it is a desperate race against time. And he faces a deadly enemy who will stop at nothing . . .

'Nobody does it better... nobody!'
Stephen Coonts

'Just about the best storyteller in the business'
New York Post

The guy I read * Tom Clancy *
Cussler is hard to beat * Daily Mail *
Delivers what it promises * Financial Times *
The Adventure King * Sunday Express *
Clive Cussler was the author and co-author of a great number of international bestsellers, including the famous Dirk Pitt (R) adventures, such as Celtic Empire; the NUMA (R) Files adventures, most recently The Rising Sea; the Oregon Files, such as Shadow Tyrants; the Isaac Bell historical thrillers, which began with The Chase; and the recent Fargo Adventures, which lastly included The Oracle. Cussler died in February 2020. Graham Brown is the author of Black Rain and Black Sun, and the co-author with Cussler of Devil's Gate, The Storm, Zero Hour, Ghost Ship, The Pharaoh's Secret, Nighthawk and The Rising Sea. A pilot and an attorney, he lives in Arizona.
GOR007160361
9780718179885
0718179889
The Pharaoh's Secret: NUMA Files #13 by Clive Cussler
Clive Cussler
The NUMA Files
Used - Very Good
Paperback
Penguin Books Ltd
2015-11-19
432
N/A
Book picture is for illustrative purposes only, actual binding, cover or edition may vary.
This is a used book - there is no escaping the fact it has been read by someone else and it will show signs of wear and previous use. Overall we expect it to be in very good condition, but if you are not entirely satisfied please get in touch with us
Trustpilot